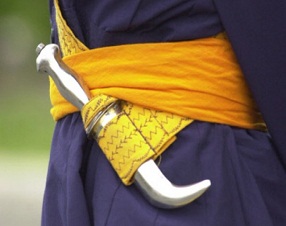 Very many people question the need of Kirpan or the sword in the atomic age. Others require an explanation for the wearing of the sword. How can sword he reconciled with spirituality ? Even before Guru Gobind Singh Sahib, his grand father Guru Hargobind had donned the sword as a twin-symbol of temporal and spiritual power(Miri & Piri). He had maintained an army and taken part in military operations against the Mughal forces. Guru Gobind Singh Sahib justified the use of the sword as a duty and as a means of protecting the weak and the oppressed. With human brutes, non-violence is meaningless. Guru Gobind Singh Sahib says: When the affairs are past other remedies, It is justifiable to unsheath the sword. Tyrants are like mad dogs and wolves. They should be opposed in the interests of the good of humanity as a whole. The sword is neither to be used for conquest nor for wrecking vengeance. The sword is meant only for self-defence or for the good of the people. In cases of injustice and intolerance, the refusal to use the sword may do more harm than good. The Sikh's sword is not an instrument of offence but a symbol of independence, self-respect and power. Guru Gobind Singh Sahib called it Durga or Bhagwati and praises it thus : Sword that smites in a flash, That scatters the armies of the wicked In the great battle-field, 0 symbol of the brave. Your arm is irresistible, your brightness shines forth The splendour of the black dazzles like the sun. Sword, you are the scourge of saints, You are the scourge of the wicked ; Scatterer of sinners, I take refuge with you. Hail to the Creator. Saviour and sustainer, Hail to you : Sword supreme !