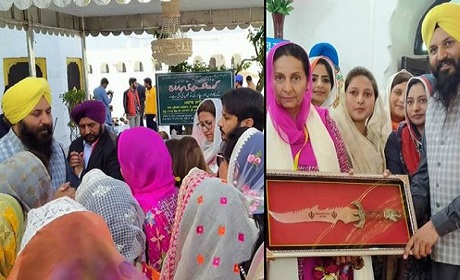 Parmeet Kaur, wife of the Chief Minister of Indian Punjab made her way into Pakistan through the Kartarpur corridor to pay her respects at Kartarpur Sahab on Monday.

Kaur made her way to the holy site of Kartarpur with a contingent of 150 women who came to pay their respects, founded by the first guru of Sikhism, Guru Nanak, it is believed to be the first Sikh commune and is considered sacred. Pakistan Sikh Gurdwara Parbandhak Committee member Inderjeet Singh welcomed the guests to Pakistan.

On the occasion, Miss Kaur said that she was here to pay her respects to the holy place for Sikhs and was feeling great jubilation upon being present at Kartarpur Sahab. She also thanked the government of Pakistan for allowing her and the people she brought along a hassle-free spiritual experience.

Earlier on February 18, United Nations (UN) Secretary-General António Guterres, who was in Pakistan on a four-day visit, visited the Kartarpur Corridor. Taking to the micro-blogging site Twitter after the visit, the UN chief said: “I was honoured to visit Pakistan’s newly opened Kartarpur Corridor – a corridor of hope, connecting two key Sikh pilgrimage sites.”