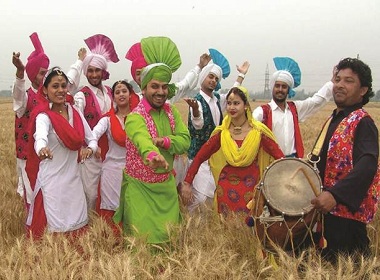 Why and how to celebrate the harvest festival of Punjab

Baisakhi, also known as Vaisakhi, Vaishakhi or Vasakhi, is the harvest festival of Punjab. The day also marks the Sikh New Year which celebrates the formation of Khalsa Panth of warriors by Guru Gobind Singh, the tenth guru, in 1699. The name ‘Baisakhi’ originates from ‘Baisakh’ the first month as per the Bikram Sambat Hindu calendar. The festival is celebrated with great fervour and enthusiasm by Hindus and Sikhs alike. Baisakhi coincides with festivals such as Vishu (Malayalis New Year), Puthandu (Tamil New Year), Bihu (Assamese New Year) and Pohela Boishakh (Bengali New Year), to name a few. It usually falls on April 13 or 14 every year. In 2019, Baisakhi falls on April 14.

Why is Baisakhi celebrated? There are two strands to Baisakhi. Firstly, Baisakhi refers to the harvest festival in Punjab. The festival occurs during the harvesting of winter crops. The day is observed by Punjab’s farming community as a day of thanksgiving for the abundant harvest. The community also seeks blessings for future prosperity and progress. Secondly, it is the day Sikkhism was born as a collective faith. On this day in 1699, Khalsa, a collective body of all initiated Sikhs, was established at Kesgarh in Anandpur Sahib. Khalsa was inaugurated by Guru Gobind Singh, the tenth Sikh guru.

How is it celebrated? As Baisakhi is known as the harvest festival, the primary celebration includes a tradition called ‘Awat Pauni’. The tradition revolves around harvesting the crops where people come together and diligently harvest the crop on the beat of drums. Besides, people also sing traditional songs and dohas. Though Bhangra or Giddah, is nowadays performed on every occasion, the folk dance is traditionally a harvest dance. The origin of the dance is traced from the festival itself.

The festival is usually marked with procession known as ‘Nagar Kirtan’, reciting hymns from the Guru Granth Sahib –the Sikh holy book. In Punjab, the festival is celebrated with much fervour at Talwandi Sabo, the place where Guru Gobind Singh resided for nine months and completed the Sikh holy book. It is also a tradition to visit the Golden temple. Another must visit celebration place is the Anandpur Sahib, the birthplace of Khalsa.