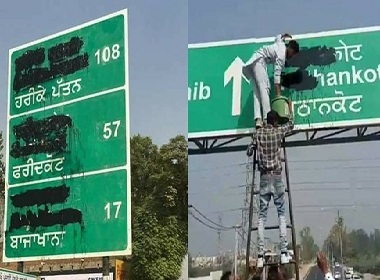 Punjabi to get top slot on signboards along national highways

CHANDIGARH: Punjab’s Public Work Department (PWD) on Sunday confirmed that works towards ensuring the primacy of Punjabi language over Hindi and English on signboards on national highways in the state will begin from October 23 and will be completed in the next two weeks.

The confirmation came week after Shriomani Akali Dal (SAD) president Sukhbir Singh Badal wrote to Union transport minister Nitin Gadkari seeking the primacy of Punjabi language on signboards on national highway in the state as the “current treatment meted out to the language has not only hurt the sentiments of the people but was also causing inconvenience.” He said that all signboards on national highways should have signs in Punjabi, Hindi and English in descending order.

“I request you to give requisite directions to correct this anomaly immediately,” Badal wrote to Gadkari. “The work on changing sequence of languages on signboards on Amritsar-Bathinda stretch of the National Highway will start from Monday and will be completed within a fortnight,” AK Singla, chief engineer, PWD (National Highways) said. Irked at the practice of preferring Hindi and English over Punjabi, the members of All India Sikh Students Federation and Shiromani Akali Dal (Amritsar) had blackened these signboards as a mark of protest.

Sikh Coalition prepares for potential violence against the community in US

Dal Khalsa to hoist Sikh flag on August 15 in Amritsar