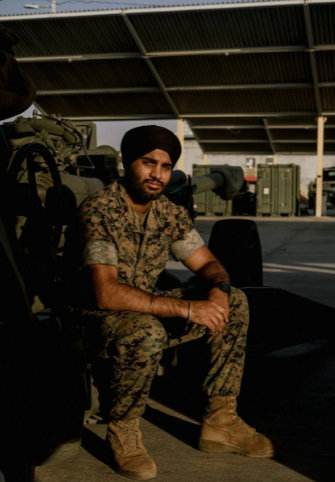 Report A Sikh-American officer allowed to wear a turban with limitations plans to sue the US Marine Corps if he is not granted full religious accommodation. Almost every morning for five years, First Lt. Sukhbir Toor has pulled on the uniform of the United States Marine Corps. On Thursday, he also got to put on the turban of a faithful Sikh. It was a first for the Marine Corps, which almost never allows deviations from its hallowed image, and it was a long-awaited chance for the officer to combine two of the things he holds most dear. “I finally don’t have to pick which life I want to commit to, my faith or my country,” Lieutenant Toor, 26, said in an interview. “I can be who I am and honor both sides.” His case is the latest in a long-running conflict between two fundamental values in the United States military: the tradition of discipline and uniformity, and the constitutional liberties the armed forces were created to defend. While Sikh troops in Britain, Australia and Canada have long worn turbans in uniform, and scores of Sikhs do so now in other branches of the military, Lieutenant Toor’s turban is the first in the 246-year history of the Marine Corps. For generations, the Corps has fought any change to its strict appearance standards, saying that uniformity was as essential to a fighting force as well-oiled rifles. The Marine Corps has made the allowance only to a point. Lieutenant Toor can wear a turban in daily dress at normal duty stations, but he cannot do so while deployed to a conflict zone, or when in dress uniform in a ceremonial unit, where the public could see it. Lieutenant Toor has appealed the restrictive decision to the Marine Corps commandant, and he says that if he does not get a full accommodation, he will sue the Corps. “We’ve come a long way, but there is still more to go,” he said. “The Marine Corps needs to show it really means what it has been saying about strength in diversity — that it doesn’t matter what you look like, it just matters that you can do your job.” For the Marine Corps leadership, an exception as small as one man’s turban was seen as so potentially dangerous that Lieutenant Toor’s request went all the way to top Marine Corps authorities. Their initial reaction in June was largely a denial. In a stern response, one Marine Corps general warned that individual expression of that kind could fray the fabric of discipline and commitment that binds the Marines. It could erode the nation’s trust in the Corps. It could undermine combat effectiveness. It could cost lives. “The Corps cannot experiment with the components of mission accomplishment,” Lt. Gen. David A. Ottignon, the deputy commandant for manpower and reserve affairs, said in the response. “Failure on the battlefield is not an acceptable risk.” Lieutenant Toor appealed to the commandant of the Marine Corps, and the Corps retreated a bit in August, allowing the lieutenant to wear a beard and turban in limited circumstances. The compelling national interests in protecting religious freedom and in maintaining effective fighting forces have been in a tug of war at least since 1981, when an Orthodox rabbi serving in the Air Force sued the service over the right to wear a skullcap while in uniform. Over time, a legal precedent emerged requiring the military to accommodate sincerely held religious beliefs in the least restrictive way that did not hinder mission accomplishment. Exactly what hinders mission accomplishment, however, is open to debate. Military leaders’ interpretations are often so broad that they leave little room for religious expression, a stance that has repeatedly led to lawsuits. The other service branches, pushed by legal challenges, have become more accommodating in recent years, allowing hijabs for Muslim women in uniform, long hair for a small Christian sect and beards for a few troops who applied as Norse Heathens. Nearly 100 Sikhs currently serve in the Army and Air Force wearing full beards and turbans. A Sikh cadet graduated from the U.S. Military Academy at West Point this spring in a smartly tied white head wrapping, among a sea of brimmed service caps.