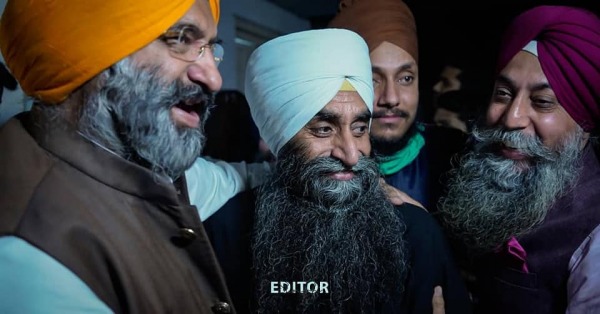 Jammu-based struggling farmers Bhai Mohinder Singh Khalsa and Bhai Mandeep Singh were released on bail during the evening hours of March 23. The duo farmers received a warm welcome outside the Tihar jail amid the presence of DSGMC president Manjinder Singh Sirsa. Notably, the duo farmers were arrested from Jammu by the Delhi police on February 22 in relation to January 26’s incident that occurred at the Red Fort in Delhi. Interacting with media on this occasion, Bhai Mohinder Singh Khalsa said that the intention of the ruling Indian government was to make the farmers suffer by pushing behind the bars but the farmers are enjoying their jail journey while reciting the name of Almighty Lord. Youth farmer Mandeep Singh said that all the farmers arrested by the Delhi police are spending their time in jail while being in high morale. Bhai Mohinder Singh Khalsa’s brother highly hailed Manjinder Singh Sirsa for bluntly standing in the back of arrested farmers. DSGMC president Manjinder Singh Sirsa said that the DSGMC will honor all the arrested farmers in front of Red Fort on March 28.