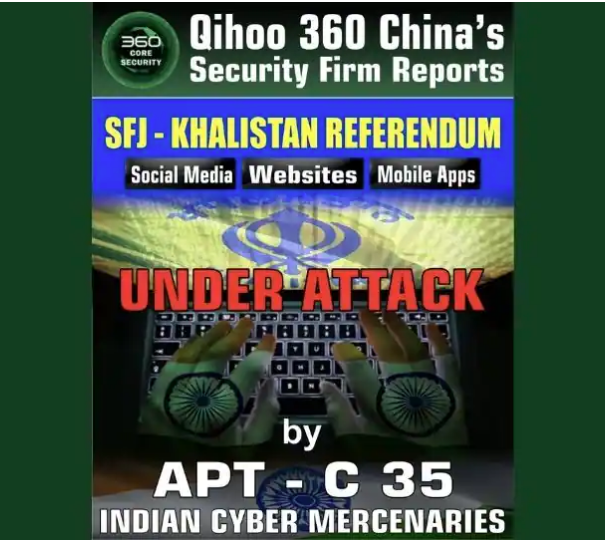 Qihoo360 Technology, a Beijing based major software company released a cyber-security report asserting that in India Sikhs with the religious and political inclination and Khalistan Referendum 2020 websites and mobile apps are under attack from Indian cyber mercenary group known as “APT C-35”. APT C-35 Indian mercenaries have launched several phishing websites and mobile apps relating to Referendum 2020 as bait to target pro Khalistan Sikhs in India. According to the report from the Qihoo 360 Core Security team, “there’s an ongoing phishing and spyware distribution campaign targeting Sikhs in India. There are approximately 30 million Sikhs, followers of a 15th-century monotheistic religion, and most of them (83%) live in Punjab, India”. “Many people in this religious group seek political and regional independence, so they have been accused of pro-separatism and anti-India propaganda. This malware distribution campaign exploits precisely that aspect of Sikhism, so it’s highly targeted and has very specific motives”, the report further reveals. “After Canadian Blackberry’s report, Chinese Security Firm has also confirmed that every Sikh with a religious or political inclination is a target of cyber terrorism in Modi’s India” stated Gurpatwant Singh Pannun, General Counsel to SFJ who had sent a communique to Chinese authorities seeking support for Khalistan Referendum. QiHoo is a premier Cyber and Software Company in China whose stock is also listed for trading with the New York Stock Exchange, the world’s most reputable and busiest stock trading market.