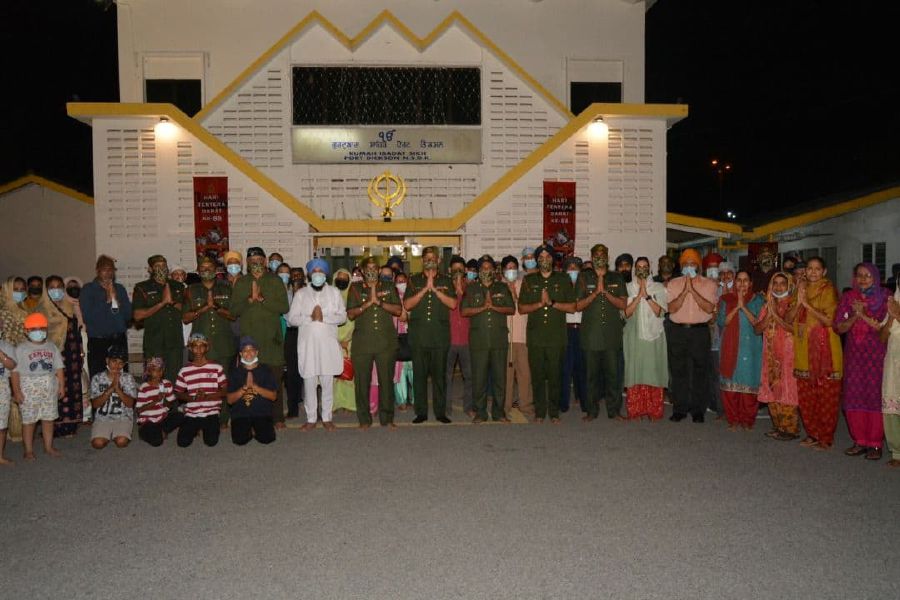 PORT DICKSON: Seeking divine blessings from the Lord Almighty is equally pertinent in preserving the country's sovereignty. Sikh officers, personnel of other ranks and their families did not forget this annual tradition by congregating at a 'jodh mela' (thanksgiving ceremony) at the Gurudwara Sahib Port Dickson in Negri Sembilan. The occasion, conducted under strict the Covid-19 pandemic's Movement Control Order standing operating procedures, was held in conjunction with the 88th Army Day anniversary that was observed on March 1. Leading the ceremony was Army Senior Officers Institute deputy commandant Col Inderjit Singh, who is also the Army Sikh Religious Affairs Association chairman. "This event is an important affair in the army's calendar of events, to pay tribute for the sacrifices of fellow brothers and those from other races, who had served their motherland loyally. "The Lord's blessings are always sought to keep our spirits up in defending our nation, safeguarding its sovereignty and maintaining peace and harmony among the diversified races and religions. "We are always thankful for the blessings from the Almighty for all He has done for us," said Inderjit. He added that apart from the physical and mental wellness, the spiritual well-being of soldiers and their kin were pertinent in boosting morale and efficiency. Despite their dwindling numbers, Inderjit said the Sikh community was ever ready to have their youths serve in the army, which was regarded as the bedrock of the nation. He recounted the services of prominent Sikh officers like Major-General (Rtd) Datuk Ranjit Singh Ramday, who had served as the army's 1st Division commander in East Malaysia, and retired brigadier-generals Baljit Singh, Rajbans Singh and Datuk Ranjit Singh Gill. "Members of the Sikh community here have bravely served the country in many battles against its enemies. "They were part of the bastion defending the nation during the trying times of World War Two, the Emergency periods and the Confrontation (with Indonesia). "Along the way, many lost their lives in frontline action, or were wounded or maimed from gunfire and booby traps," said Inderjit. Inderjit added that the thanksgiving prayers were a tribute to the invaluable sacrifices and services of fallen heroes of the security forces. "Their contributions have ensured that the country remains peaceful and harmonious. "These were the men and women who fought for our nation's independence and sovereignty. "It also serves as a remembrance and awareness for the younger generation not to take peace for granted," said Inderjit. After thanksgiving prayers and kirtan (religious hymns), the congregation savoured sweet milk-rice, followed by a vegetarian dinner (langgar) complete with traditional hot Punjabi tea, prepared and served by volunteers. Among those present were Army Training and Doctrine Command chief of staff Col Jagjit Singh, its staff officer I (Logistics) Lt Col Amrit Singh, Armed Forces Defence College deputy commandant Col Munraj Singh of the Royal Malaysian Air Force and Tuanku Mizan Armed Forces Hospital orthopaedic surgeon Lt Col Dr Rajiv Rampal. Among the veterans present were Col (Rtd) Dr Jahran Singh, Lt Col (Rtd) Karpal Singh, Major (Rtd) Datuk Tara Singh and Major (Rtd) Randhir Singh. Also there were the local Sikh Community of Negri Sembilan, including Manjit Kaur whose husband was a past president of the temple. Of significance was the presence of retiring Army Academy's paymaster Lt Col Nerwair Singh, who wore his uniform for the last time attending an official event. Nerwair, who was accompanied by wife Sarjit Kaur, had served almost his entire 37-year service career based in Sarawak, since being commissioned as a second-lieutenant in 1986. He retires on Aug 31 this year.