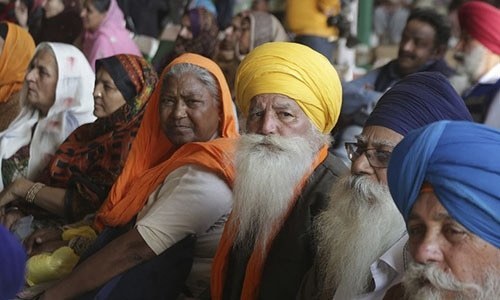 ISLAMABAD: The Gurdwara Kartarpur Governing Council on Wednesday called on the federal government to ask India to ease travel of Sikh pilgrims to Pakistan. The fourth meeting of the council was held here under the chairmanship of Religious Affairs Secretary Sardar Ijaz Khan Jaffar. Officials of the ministries of foreign affairs, finance, interior, Evacuee Trust Property Board (ETPB), Nadra and relevant security agencies were also present. It was decided that the issue of preventing Indian Sikh pilgrims from coming to Pakistan would be raised at a high level. During the briefing, the meeting was informed by the relevant authorities that India had sent two groups of Hindu pilgrims to Pakistan while the Sikhs were being prevented from visiting under various pretexts. The council was further told by the foreign ministry officials that the Indian home ministry – which was equivalent to Pakistan’s interior ministry – had denied permission to a Sikh Jatha of around 600 pilgrims to visit Pakistan for the 100th anniversary of the Saka Nankana Sahib. The group was also expected to visit five gurdwaras from Feb 18 to 21. Expressing concern over the attitude of the Indian authorities, the religious affairs secretary said: “The state should not have double standard for different religions.” “This biased attitude of the Indian authorities and prejudice towards religious minorities was unfair,” he added. Sardar Jaffar said the issue of Sikh pilgrims’ visit to Pakistan would be raised at a high level. The Kartarpur Corridor project was an example of philanthropy and interfaith harmony, but the meeting deplored the unannounced restrictions on pilgrims by the Indian authorities. Secretary Jaffar also reviewed the arrangements of the Kartarpur Corridor project. Pace of ongoing development works related to facilities required by the pilgrims, such as connecting roads towards Gurdwara Kartarpur Sahib, were reviewed. The meeting decided to provide opportunities to domestic and foreign investors to invest in the project in the near future to harness the potentials of religious tourism. Published in Dawn, February 25th, 2021