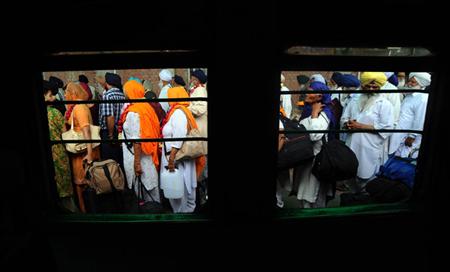 Today, the Indian Home Ministry announced a ban on Sikh pilgrims wanting to observe Saka Nankana’s centenary in Pakistan, citing the “security and safety of the pilgrims”. The Indian government’s order has come just a day before the Sikh pilgrims’ scheduled departure for Pakistan on February 18. Notably, the Pakistani High Commission had granted visas to 505 Sikh pilgrims for observing this historic day at Gurdwara Janam Asthan Sri Nankana Sahib on February 21. Still, the Indian government has crushed these pilgrims’ pious aspirations by prohibiting them from visiting Pakistan. Today, the Indian Ministry of Home Affairs sent a letter in this regard to the apex Sikh body Shiromani Gurdwara Parbandhak Committee in the afternoon hours. In this letter, the Indian Home Ministry has cited the issue of “security and safety of pilgrims in Pakistan” while debarring them from visiting Pakistan. Terming the Indian government’s move as an attack on the Sikh faith, SGPC appointed Akal Takht Jathedar Giani Harpreet Singh has said that the ruling BJP government has imposed this ban like the Mughal rulers used to impose a ban on pilgrimages of Hindus. “In November last year, Sikh pilgrims had visited Pakistan to celebrate Guru Nanak Sahib’s Parkash Purab. Then how come the status of safety and security of pilgrims has changed within a short time,” he added. SGPC president Bibi Jagir Kaur has also slammed the Indian government while saying that the restriction on Sikh pilgrims at the last minute after completion of all preparations was a testament to the anti-Sikh mentality of the Government of India. “If there was no danger then, how did the danger arise now? If there was any such thing, then why India’s Government did not make it clear earlier during the ongoing process. The Pakistan Embassy issued the visas only after the inspection report of each pilgrim was done by the Indian and the state government agencies”, said Bibi Jagir Kaur. Bibi Jagir Kaur said that this argument was by no means justified as a group of Sikh pilgrims had visited the shrines in Pakistan last year in November.