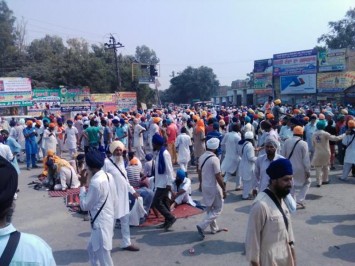 CHANDIGARH, Punjab—The State Home Department of Punjab has suspended two police officers, namely ADCP Paramjit Singh Pannu and SP Baljit Singh Sidhu, for their involvement Kotkapura firing incident. Notably, the duo police officers were under the Arms Act in the FIR of the Kotkapura firing incident. It is learned that the duo cops have been suspended on the recommendation of Punjab DGP Dinkar Gupta. The development has come just two days after the Punjab & Haryana High Court’s direction to CBI for handing over all case diaries and papers related to the sacrilege episode of 2015. On October 14 in 2015, the Punjab police cops had opened unprovoked firing on Sikh protesters in Kotkapura at the behest of the then DGP Sumedh Saini. Several Sikh activists were left severely injured in this firing incident. The CCTV footage of this firing incident had come to the fore. The then IG Paramraj Umranangal was observed continuously receiving directions from Sumedh Saini over the phone before opening an unprovoked firing baton charging the peacefully protesting Sikhs. Paramjit Singh Pannu was serving as an Additional Deputy Commissioner of Police, Ludhiana, while Baljit Singh was the then DSP of Kotkapura. Later, an FIR under sections 307, 326, 324, 323, 341, 218, 120-B, and 34 of the IPC and section 27 of the Arms Act was registered concerning this incident.