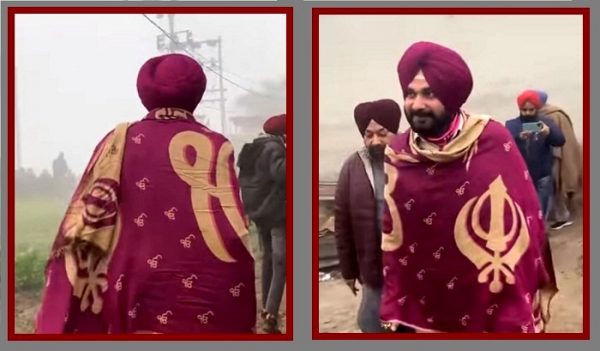 CHANDIGARH, Punjab—Acting quickly on the directions of SGPC appointed acting Akal Takht Jathedar Giani Harpreet Singh, Congress leader Navjot Singh Sidhu has tendered an apology for wearing a shawl having Sikh symbols ੴ and Khanda. Yesterday, Giani Harpreet Singh had asked Navjot Sidhu to tender an apology for hurting Sikh sentiments through his act. “Shri Akal Takht Sahib is Supreme, If I have unknowingly hurt the sentiments of even One Sikh, I apologise !! … Millions wear the revered Symbols of Sikhism on their Turbans, Clothes and even carve Tattoos with Pride, I too as a humble Sikh wore the Shawl unintentionally,” tweeted Navjot Sidhu today. In his apology, he has also tried to highlight that his act was not different than millions of other people who wear symbols of Sikhism on their turbans, clothes and even carve tattoos on their body. It may be recalled here that Navjot Singh Sidhu had worn this shawl while appearing in a public event in village Sandhanwal of Jalandhar district on December 27. On December 29, SGPC appointed acting Akal Takht Jathedar Giani Harpreet Singh had condemned Navjot Sindh Sidhu’s act of wearing this shawl while directing him to apologize. A number of Akali leaders tried to use this act by Navjot Sidhu to divert attention away from the farmers protest, however, Navjot Singh acted swiftly and apologized. Giani Harpreet Singh had said that Navjot Singh Sidhu must have known that wearing such kind of cloths was against the Sikh code of conduct. He has asked Navjot Sidhu to seek an apology for this act. It is pertinent to note here that a large section of Sikhs was complaining against Navjot Sidhu’s this act after Sidhu’s visuals surfaced over social media.