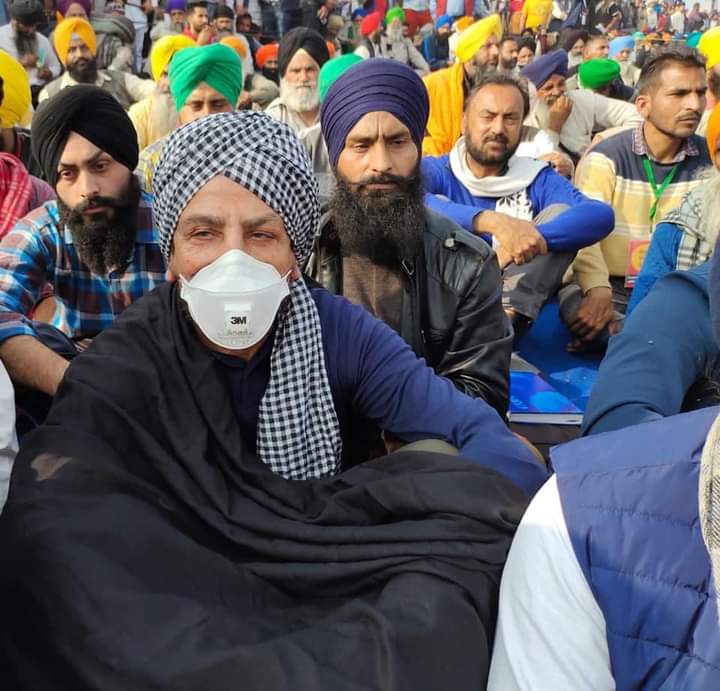 NEW DELHI—Row over ‘anti-Punjabi’ remark made by renowned Punjabi singer Gurdas Mann in September last year is refusing to die down and he was not allowed to address the protestors from the main stage of ongoing farmers’ agitation on the outskirts of Delhi. As the majority of the Punjabi singers have already joined the protests against the “anti-farmer” laws and even they themselves organized rallies and staged dharnas across Punjab, people of Punjab were raising questions over the silence of Mann. Though he shared a video a few days back in favour of the cause of farmers following remarks against his silence, he failed to calm down the angry people. So, he made a sudden appearance at the site of protest in Delhi. Mann was seen wrapping a small turban that is usually seen on the heads of villagers in Punjab, to express solidarity with the farmers. His presence was recognized and welcomed by the person conducting the stage. Mann was asked to stand and utter ‘fateh’ before the gathering. When he stood to do so, he was urged to come on the stage, but some farmers stood up and raised objections over him getting on the stage. They recalled his remark on Punjabi language and maintained that he had never apologized for his remark. Other participants of the agitation also endorsed this question and made Mann sit again in his place. On September 14 last year, Union home minister of India Amit Shah had floated the idea of ‘one nation, one language’ during his speech on Hindi Diwas in New Delhi. This idea drew criticism as it promoted the Hindi language by eliminating all other languages in India. Supporting this idea, Maan had said on the talk-show, “Hindi is being talked about nowadays, Hindi must be there. I would say there must be Hindustani (language), a mixture of common words of Hindi, Urdu and Punjabi languages. But, the weaker thing should not be destroyed for the stronger one… This is necessary that one nation must have one language, so that one can get his words understood, even in south India. If you cannot do so, what is the use of being a Hindustani? France has its own one language and its people speak it. Similarly, Germany has one language that the entire country speaks. And if our country speaks (one language), what is wrong with it? It should be spoken. If we are emphasizing the mother tongue so much, emphasis should also be laid on the ‘masi’ (aunty or other languages).” Instead of apologizing for his remark, he uttered obscene words for the persons who protested against him during his show in Canada.