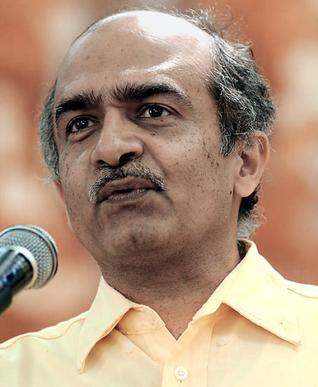 One of the leading human rights activists of India and Supreme Court senior lawyer Parshant Bhushan has saluted Sikh community for once again standing against the injustice of BJP-led union government and playing leading role in the ongoing struggle against its three farm laws that is being termed ‘draconian’ by farmers and economists.
He made a surprise appearance at the state-level function organized by Punjab government as a closing ceremony of year-long celebrations of Guru Nanak Sahib’s 551st Parkash Gurpurb (birth anniversary) on November 30 at Dera Baba Nanak, a border town which is linked to major Sikh shrine Gurdwara Darbar Sahib, Kartarpur Sahib, in Pakistan, through a visa-free corridor. Punjab Cabinet Minister Sukhjinder Singh Randhawa requested him to share his views with the Sikh devotees present on the occasion in presence of Guru Granth Sahib. Punjab Chief Minister Captain Amarinder Singh and his several cabinet colleagues were also there.
While addressing, Bhushan lauded Sikhs for their service to humanity and contribution in the struggle for justice to victimized people of the world. He also recalled the help extended by the Sikhs to Indian Muslims when they were agitating against the Citizenship Amendment Act (CAA) in Delhi, and a section of the Muslim community, called Rohingya who were expelled by Burma government. He delivered his speech in Hindi. Here is its English translation:
“Though I am not born a Sikh, my wife belongs to a Sikh family. Because of her, I got an opportunity to learn about the faith founded by Guru Nanak. I would like to mention a thing that impressed me the most. This religion makes the human being stand against all kinds of injustice to the underprivileged and victimized people. I am seeing the practice of the principles of this religion here and there. Our Muslim brothers participated in the protests that erupted against the CAA promulgated by the Centre. However, the Centre tried its best to defame these protests. The Muslim protesters were dubbed “rioters” etc. The community that stood with them at the moment and backed them, was the Sikh community. It was the community that fed them. It organized langar for them. Spirit of sewa (voluntary service) is the biggest quality of the Sikhs.
Rohingya people after being evicted from Myanmar ruthlessly, are in a very pitiable condition either in Bangladesh or Hindustan. They have been massacred on large scale. Yet, Centre and the BJP that leads it, is defaming already oppressed people and branding them “terrorists”. There were the Sikhs who came to the fore to extend help to them and organize langar for them in the refugee camps. I am witnessing everywhere that they are standing against injustice. This is what was taught by Guru Nanak. These are the Sikh farmers of Punjab, who are playing a leading role in the country-wide fight against three farm laws of Centre. I was watching a video clip of the farmers who were on the way to Delhi for the demonstration. In this video, I listened to a farmer saying that they want to go to Delhi peacefully so that their voice reaches the government and consequently it starts serious talk with them. He said if any kind of obstruction is placed on our way, they would remove it, but not opt any kind of violence. He said, if the cops thrash them, they would face it but not retaliate. I salute the spirit of the farmers who could not be demoralized even as the Haryana Police used water cannons and tear gas on them in cool weather. They have forced the Centre to come to the table of negotiation with them. I hope the Sikhs will keep following the teachings of Guru Nanak”.