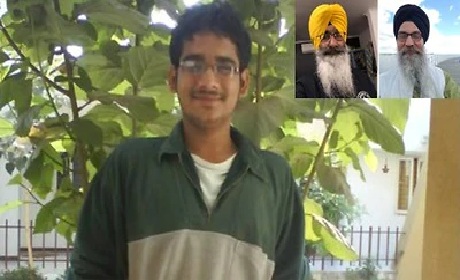 Ridden by financial hardship, Indian student Dhruv Dwivedi reached out to a gurdwara (Sikh temple) in Melbourne for help. Almost immediately, he says he received food, mentoring and immense love that has altered the course of his life.

Share on Facebook Share on Twitter Life’s gift to all of us often comes in the least expected ways. For Mr Dwivedi that moment came last week, in the middle of a pandemic, when he was forced to shift out of his home, laid-off from his job and ran out of his cash reserve. That’s when his mother back home in the western Indian state of Gujarat encouraged him to reach out to a Sikh temple in the vicinity. Quoting his mum, the 26-year-old says: “She said, a gurudwara will never turn you down.”

International student facing financial hardship due to pandemic says the act of kindness "changed my life" Two men at the Hoppers Crossing Gurudwara in Melbourne returned Mr Dwiwedi's call for help "This is my way of expressing gratitude to these god-sent men," says Mr Dwivedi “So, I googled for a temple close to home. The nearest was the Hoppers Crossing gurudwara. I looked for their number and gave them a call. At first, they didn’t answer, but within minutes a man named Harnam Singh returned my call,” says Mr Dwivedi.

The management student who arrived in Australia nearly two years ago says he shared his ordeal with Mr Singh over the phone, who invited him to the gurudwara. “He was extremely kind to me over the phone. He told me that I could stop by at the gurudwara for food, groceries or simply to talk to them anytime I wanted or needed help and so I did.

“That evening when I went to the gurudwara, I bumped into yet another sage, Mr Paramjit Singh who served me food, counselled me, spoke to me, told me about other students who reach out to the gurudwara for help,” he reminisces.

Recalling the incident, Harnam Singh says he has never met Dhruv in person but has spoken to him over the phone. “The first day he called, he sent us a long list of things he needed which also included Maggi noodles. I told him we did not have such fancy items, but he is more than welcome to stop by at the gurudwara to eat langar or pick up take away meal boxes that we prepare.