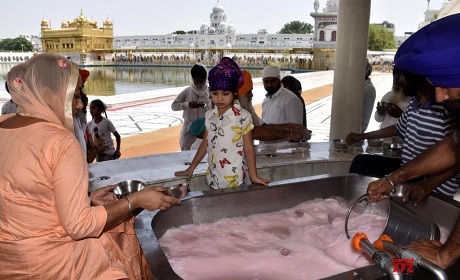 Sikh Guru Arjan Dev, the fifth guru of Sikhs, was the first guru in the Sikh faith to attain martyrdom in 1606. The day which falls on the 25th of Jeth (the third month in the Sikh calendar) is a gazetted holiday in the state of Punjab. Devotees paid their obeisance at the Golden Temple today to mark the 414th martyrdom day of Guru Arjan Dev.

Born in April 1563 to Guru Ramdas and Mata Bhani in Goindval, India, Guru Arjan Dev compiled the teachings of all Sikh gurus before him in the Holy Scripture Adi Granth, now called the Guru Granth Sahib. He included the compositions of both Sikhs and Muslims in the holy book, considering them consistent with the teaching of his gurus.

Arjan Dev became the fifth Sikh guru in 1581 after his father and the fourth Sikh Guru Ramdas passed away. The third Sikh Guru Amardas was his maternal grandfather.