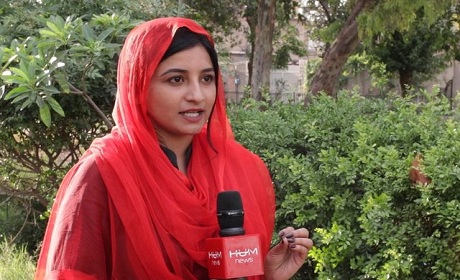 Kaur said that ‘The Sikh Group’ in UK has nominated her for an award for highlighting problems of Sikh community in Khyber Pakhtunkhwa. She said 100 people from around the world have been nominated in the first phase and some of them will be shortlisted for the award.

She said The Sikh Group is a global organisation which awards people from Sikh religion from different parts of the world who serve the people in different ways. Manmeet Kaur said she has worked for promotion of inter-faith harmony and rights of minorities in Pakistan. She said Indian singers Ammy Virk and Gaurav Randhawa have also been nominated along with her for the award. She said the institution also awarded Indian Prime Minister Manmohan Singh and her nomination for this award is a great achievement for her.

While violence against religious minorities, particularly Christian and Shia Muslims, has been a painfully familiar story in Pakistan, Sikhs have long been considered one of the country’s most protected minorities. In Peshawar, they have lived peacefully among Muslims for over 250 years, working mostly as traditional healers, and running pharmacies and cosmetics and clothing stores.

However, Manmeet Kaur said her nomination for the award will encourage other women to work hard in their respective fields and serve humanity. She said if she is lucky enough to eventually get the award, she will represent the whole country in UK and tell others that women in Pakistan never lag behind in any field.