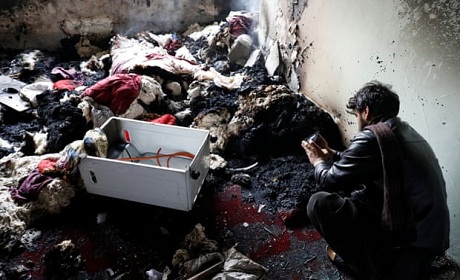 A gunman and suicide bombers have killed at least 25 worshippers, including women and children, and injured many others in an early morning attack on a Sikh Gurdwara in the heart of Kabul.

The ordeal lasted hours as the gunmen held hostages on Wednesday while Afghan special forces and international troops tried to end the siege in a complex that is home to many families, as well as a place of worship.

Narender Singh Khalsa, a member of parliament who represents the Sikh community, told Reuters that there were three attackers, who arrived when the buildings were full of worshippers. The terrorist group, which has targeted Sikhs in Afghanistan before, said it carried out the attack.

Up to 200 people were trapped inside the temple when the attack began around 7am, interrupting worship that had started an hour earlier. The attackers reportedly threw grenades, and after bursting into the complex, started shooting indiscriminately. “The attackers arrived on the stairs and started killing the women. My nephew shouted and said to me ‘Uncle, please go downstairs’, and when I tried to go downstairs, they shot my nephew in the head,” said Harander Singh who lost several other relatives including his wife, father and daughter.

“My dearest daughter was wounded, and she was repeatedly calling me ‘Dad’ before she died,” he told Reuters, through tears. The attack was condemned internationally and across much of Afghan society. “My colleague Meharwan Singh lost his uncle and 20 friends, including two children and four women, in this appalling terrorist crime today,” said Nader Nadery, a top civil servant and presidential adviser, on Twitter. “I share his pain and outrage.”

Afghanistan’s tiny Sikh community is one of few religious minorities in the country, protected by law but frequently targeted by extremists and subject to discrimination. Thirty years ago it was 500,000 strong, but after decades of conflict and the rise of the Taliban – who ordered Sikhs to wear yellow armbands – many have sought asylum in India and the community is now thought to be reduced to around 300 families.