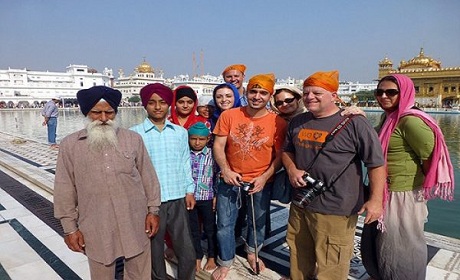 The foreign devotees, who arrived in Punjab during the last few days, are facing a lot of problems due to lockdown imposed in Punjab because of coronavirus.

An American, who has joined Sikh religion recently, faced problem in getting shelter after the SGPC expelled him from the guest house. He is also not able to book room in any hotel because he is a foreigner.

Gurdhian Singh, a baptized American Sikh, informed that he was staying in the guest house of Sri Darbar Sahib at Amritsar from the last two days but the management of guest house asked him to leave room forcefully on March 22 and local hotels are also not providing him room on rent due to fear of corona virus because he is a foreigner.

He claimed that he is healthy and ready to be tested for corona virus. On being contacted by the media, an SGPC official said that if health department gives him a fitness certificate then they are ready to allot him room in the guest house of Sri Darbar Sahib. Later, he was sent for test in civil hospital late night on March 22 by the Police.