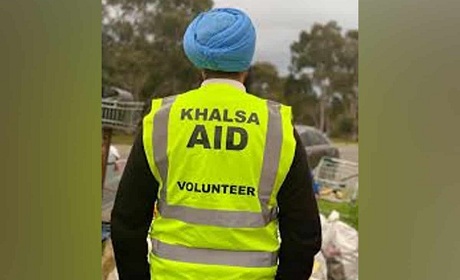 Volunteers of ‘Khalsa aid’ came to help like angels

Miscreants looted the shops and establishments of the Muslims in a planned manner. Volunteers of the Khalsa Aid, a Sikh organization gave financial assistance to the victims. They reconstructed 11 shops which were set ablaze during the communal riots.

It may be recalled that the Sikh volunteers had helped women who were agitating at Shaheen Bagh. They organized common kitchen for those women. Sikh brothers opened the doors of their houses and Gurudwaras for the victims.

The team of Siasat’sMillat Fund and Faiz e Aam trust witnessed the financial assistance by the Sikhs in reconstructing the houses and the shops. A Sikh volunteers told that financial assistance was given to the petty traders belonging to the minority community whose carts (Bandis) were set on fire.

Nearly 50-60 carts were distributed to the Muslims. It is appreciable that a Sikh Youth working as a service engineer is participating in welfare activities. Sikh college students helped the protesting women at ShaheenBagh. The victims told that the activists of Khalsa Aid came to help them like ‘angels. Delhi Wakf Board is reconstructing the mosque which was damaged by the miscreants and saffron flag was hoisted on it and eleven shops belonging to the mosques were also set ablaze. It is reported that the locality has a population of 5 thousand. There are 35 houses of the Muslims there and the houses which were burnt, the people were coming back saying that they are returning to their localities to protect the masjid. Another group of 500 Muslims has shifted to this locality.