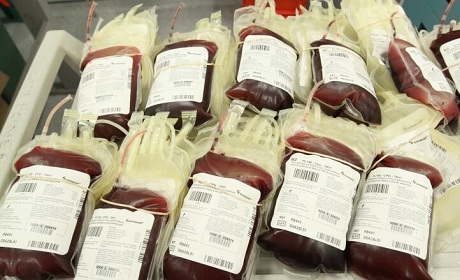 For the second year in a row, the United Sikhs of London are filling up all of Canadian Blood Service's local appointments on Boxing Day – and they're urging others to make appointments too.

Gurmeet Kaur, a Sikh aid coordinator with the United Sikhs of London, said filling 62 appointments at the London Blood Donor Centre is a way of giving back to the community and recognizing a day of religious significance. "We are commemorating the sacrifices of the little sons of one of the gurus of Sikh religion," she explained.

"They stood up for religious freedom and human rights, and they were bricked alive by the empire at the time in India." The boys, who were seven and nine years old, were killed on Dec. 26, 1704, said Kaur.

"We chose … Canada as our home country, and people have established here, so we just wanted to give back to the community. And this was the least we could do for the sacrifices done for us." Jamie Reichmann, the territory manager for the Canadian Blood Services, said the last few weeks of December are generally a challenging time to collect blood.

"So many donors are busy with seasonal commitments," she explained, adding that the United Sikhs of London have "definitely stepped up to the plate." Reichmann said Canadian Blood Services needs to fill 23,000 appointments across the country before Jan 5.