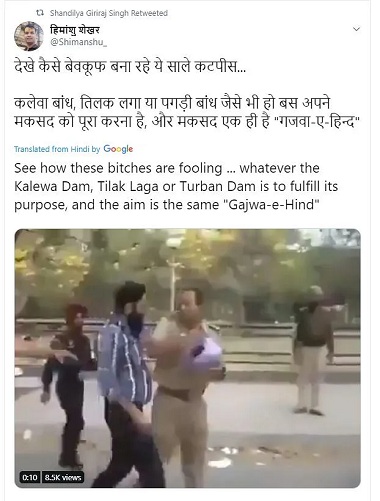 A viral video in which some cops can be seen removing the turban off a man’s head is doing rounds on social media. It is being shared with the claim that a Muslim man wore a turban to impersonate a Sikh and instigate violence.

The video, which is being massively shared on Twitter, was also retweeted by Union Minister Giriraj Singh.

The video is also being shared on Facebook with a similar claim, stating that Muslims are using fake turbans to pass off as Sikhs protesting against the Citizenship (Amendment) Act.

The Quint could confirm that the video is in fact from 2011 and is being shared with a misleading claim. The video is of an incident when a Sikh Man was pulled up by cops during a protest in Punjab’s Mohali and his turban was forcibly removed.

A Google keywords search using ‘Police removing Sikh man’s turban’ directed us to a report by a website under the name SikhNet. According to the report, the incident happened on 28 March 2011 when, “A Sikh youth, participating in a peaceful sit-in was pulled aside by police officials and his Turban was forcibly removed without cause by a Police officer.” The report also mentioned that United Sikhs' Chandigarh based lawyer had filed the complaint against the Police Officer responsible under Section 295 A of the Indian Penal Code.

A report by the Times Of India corroborated these details. According to the report, two gazetted officers of Punjab police, including an SP and SHO, were suspended following this incident. The cops who were suspended were identified as SP (detective) Pritam Singh and Phase VIII police station SHO, SI Kulbhushan Singh.

Hence, an old, unrelated video is being shared out of context in an attempt to discredit the protests against the Citizenship (Amendment) Bill.