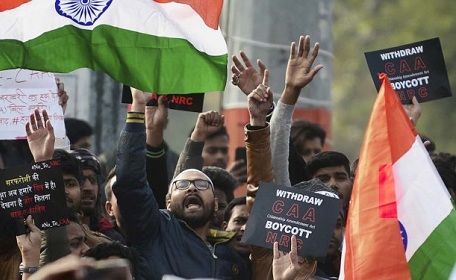 India’s Citizenship Act Strikes at the Heart of Constitutional Principles

Last week witnessed unprecedented scenes of protest across India as the nation revolts against a new act that amends the country’s citizenship laws. Hundreds of thousands of activists spilled out on the streets, protesting the amendment. They argue new citizenship law violated India’s secular constitution and discriminates against Muslims. Within a week, the police killed 25 protestors, while several thousands of others were arrested.

Under the provisions of the amendment, Hindus, Buddhists, Jains, Christians, Sikhs, and Zoroastrians from India’s Muslim-majority neighbors Afghanistan, Pakistan, and Bangladesh will find their applications for citizenship fast-tracked.

By explicitly omitting Muslims, Jews, Bahais, and atheists, the Citizenship Amendment Act (CAA) introduces a religious filter that strikes at the heart of the secular principles enshrined in the constitution. The right-wing Hindu nationalist Bharatiya Janata Party (BJP), which commands a crushing majority in India’s parliament, rammed the amendment through with the support of key allies against a hopelessly outnumbered and outmaneuvered opposition on December 12.