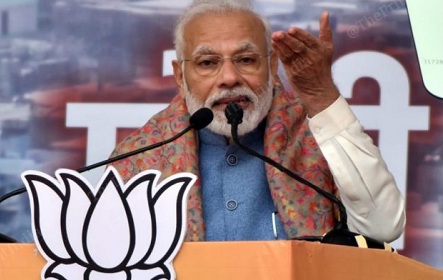 It is widely known that the Bharatiya Janata Party and its ideological parent Rashtriya Swayamsevak Sangh don’t share the same views as Mahatma Gandhi on India’s Partition. So, it came as a surprise when Prime Minister Narendra Modi recently cited one of Mahatma Gandhi’s Partition-related quotes to defend his government’s amendment to the Citizenship Act.

Always eager to appropriate Gandhi, PM Modi taunted the Congress Sunday during his rally at Ramlila Maidan in Delhi, “Gandhiji had said that Sikhs and Hindus living in Pakistan will always be welcomed in India. This Act is in line with the promise the Government of India made in 1947…You believe me or not but at least believe Gandhiji.” It hardly matters to the BJP’s propaganda machinery that it’s been 72 years since Gandhi made the remark and 48 years have passed since the collapse of ‘the two-nation theory’ with the formation of Bangladesh from erstwhile East Pakistan.

A booklet in circulation highlights Gandhi’s quote in a more asserting form, with a reference date and a photo of Gandhi to support the claim. The quote says, “Mahatma Gandhi announced openly in a prayer meeting that Hindus and Sikhs staying in Pakistan can come to India by all means if they do not wish to stay there. In that case, it is primary duty of Indian Government to provide them employment and make their lives normal.” [Naagrikata (Sanshodhan) Adhiniyam-2019, Ek Parichay Kamal Sandesh, Dr. Mukerji Smriti Nyas, New Delhi, December 2019, page 9]

Before we go ahead, it is imperative to note what Gandhi actually said about the treatment of minorities after Partition. He mentioned Hindus and Sikhs a couple of times in his post-prayer speech on 26 September 1947. He talked about Pandit Thakur Datt who had to flee Lahore, and said that “he (Gandhi) wanted him and all the other Hindu and Sikh friends to help him in restoring real peace in Delhi. Then he would proceed to Western Pakistan with fresh strength.” (Delhi Diary, M.K.Gandhi, 26-9-1947, Page 38, Navjivan Publication, Ahmedabad, 1948)

On the role of the Indian government, Gandhi said, “To secure justice for the Hindus and Sikhs was the function of the Government.” (Delhi Diary, M. K. Gandhi, 26-9-1947, Page 39) This quote has been deliberately dug up and spiced up to buttress Modi government’s arguments in the CAA debate. It is a travesty of truth to quote Gandhi falsely and that too in support of a law that discriminates against refugees from neighbouring countries on the basis of religion. If one is really interested in knowing what Gandhi said during testing times, then his post-prayer speeches from September 1947 to January 1948 serve as a better guide. Just a day before the speech mentioned above, Gandhi dealt with the subject of ill-treatment of minorities with more force. In reply to a question, he said he did not propose that the Indian government should ignore the mistreatment of Hindus and Sikhs.