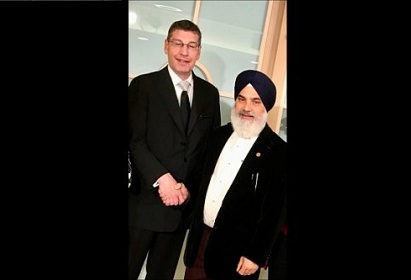 Blaming the NDA government under Narendra Modi for its aggressive march against minorities and nationalities, the Dal Khalsa has reached out to the United Nations about the volatile developments that spell an anarchic situation for religious minorities in India.

From abrogation of Article 370 in Kashmir to India’s Supreme Court’s “political” verdict on Babri Masjid/Ayodhya dispute to the passage of the Citizenship Amendment Act by the Indian parliament -everything is being played out in India’s march to become a professedly Hindu country, reads the memorandum submitted to the High commissioner for Human Rights Michelle Bachelet in Geneva. Party’s secretary for human rights Pritpal Singh Switzerland met representative of High Commissioner at the UNHCHR office in Geneva and apprised him of the increasingly difficult and dangerous times for all minorities and nationalities, who want to stand up for the fundamental rights of oppressed people.

Urging the UN to make Modi dispensation answerable for its fascist tendencies to the world community, the Dal Khalsa leader narrated the public outcry across the spectrum against divisive CAA. Unquestionably, there are double standards of the government of India vis-à-vis the majority community and the Muslims, not only in Kashmir but the whole of India. It is apparent that the Modi government was deliberately pushing the people to a point of no return and this has dangerous portents for South Asia.

He told the UN officials that how Indian govt denied them the right to protest against gross violations of rights of Kashmiri people The Indian state barred around 200 activists associated with Dal Khalsa and Shiromani Akali Dal (Amritsar) from entering Jammu and Kashmir at the Madhopur-Kathua interstate border on 9 December on flimsy grounds. The activists were on their way to observe World Human Rights Day at Lal Chowk, Srinagar.

Complaining about the muted response of the United Nations and its Security Council members, which has been making soft recommendations to the fascist regime, the Dal Khalsa leader Pritpal Singh told UN representative that the stoppage of Sikh leaders and activists by the government from entering Jammu and Kashmir was a loud declaration by the Indian state that those who want to observe Rights Day for the Kashmiri people have no right to do so. To a question, Dal Khalsa spokesman Kanwar Pal Singh said its time for the UN intervention as the silence of the international community leadership was hurting the relevance of the UN Human Rights Charter.