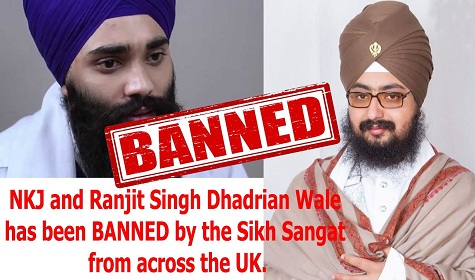 As per the latest developments, a number of UK Sikh organisations and Gurdwaras have banned controversial Sikh preacher Harinder Singh from performing the duty of religious preachment.

The decision to ban Ranjit Singh Dhadrianwale and Harinder Singh was taken collectively by representatives of a number of Sikh organizations and Gurdwaras across the UK. The gathering was called after a video of Harinder Singh went viral on the social media, in which he alleged that Guru Nanak Dev Ji may have been murdered or kidnapped, and his body was never recovered by anyone.

Following are the five resolutions that were passed at the gathering – Harinder Singh and Ranjit Singh Dhadrianwale have been banned for doing any prachar in the presence of Sri Guru Granth Sahib Ji or otherwise in the UK. We request that other countries also follow suit on this resolution until both pesh at Sri Akal Takht Sahib. Sanjit is appealed upon to not book either of them for parchar at any event and to avoid inadvertently increasing their unnecessary exposure on social media. Gurdwara Committees are directed not to book either of them for any events. All Sikh media is reminded of its Panthik responsibilities and strongly requested not to give either of them any unnecessary exposure. Sri Akal Takht Sahib is aware of the issues and is humbly requested to take strong action against both of them in line with Gurmat traditions in a timely manner. Until such time that Sri Akal Takht Sahib has taken its decision, no individual, organsation or Gurdwara Committee member should have any laison with either Harinder Singh or NKJ or Bhai Ranjit Singh Dhadrianwala so to maintain the discipline of the social boycott.