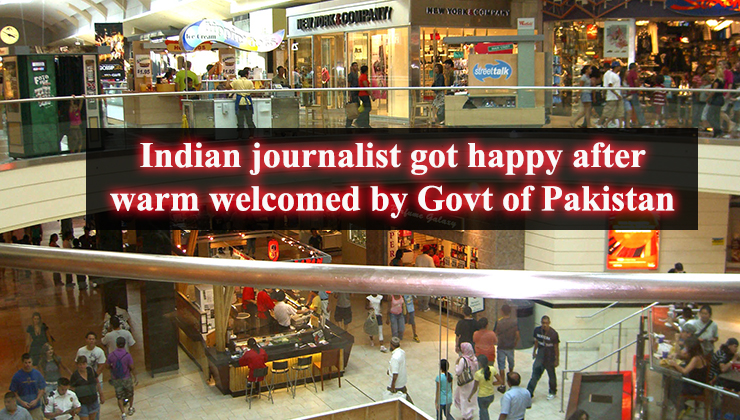 Indian journalist got happy after warm welcomed by Govt of Pakistan

When all eyes were on Kartarpur Corridor’s landmark inauguration scheduled for November 9, a day before the main event (on November 8), a group of Indian journalists crossed into Pakistan via the Wagah Border. They were in Lahore to attend the opening ceremony of the corridor ahead of the 550th birthday of Baba Guru Nanak on November 12. Baba Guru Nanak is also respected among the Muslims of Pakistan because of his teachings on humanism and unity, and against separatism and barbarism.I was the part of a team tasked with hosting the Indian journalist delegation and it was a riveting experience to say the least. The 34-strong delegation comprised of both print and electronic journalists including at least ten women, most of them belonging to the Indian Punjab region.

On November 9, they attended the inauguration of the corridor by Prime Minister Imran Khan. They were speechless as they got of the bus and soaked in the grandeur of the gurdwara. I too could feel that they were spiritually elevated there, forgetting that they were here to cover the event. On the eve of Kartarpur Corridor opening, we had arranged a dinner for them at the Governor’s House. An all-vegetable and lentils menu did not go well with a few of them. A journalist said,

“I was expecting some beef and mutton dishes too.”

When explained, that it was arranged viewing cultural and religious sensitivities of the delegates, the visiting journalist said that the love and respect the team had received in Pakistan, had changed his views about the country. Besides attending the Kartarpur Corridor event, the Indian journalists were keen to see sights and shop in Lahore. Owing to the recent wave of smog and pollution in Dehli, the blue Lahore sky was really fascinating for the team. They lamented that they had not seen the sky in a few days in Dehli. In about two weeks, as I write this, Lahore too is under a blanket of smog and schools are being shutdown, which is very unfortunate. The delegates could not be taken to Lahore’s historical places including the Fort, Badshahi Mosque and Shalimar Gardens due to the paucity of time. They could only be taken to shop and when they got to the Packages Mall, the delegates went on a shopping spree. They loved an array of Pakistani clothing brands. To the extent where they bought as many un-stitched and stitched pieces as they could. One of the Indian journalists even wore the Pakistan bought kurta on her journey back home.

Some of the women from the delegation really liked my dupatta, prompting me to gift them to all the women in the delegation. My personal gifts were accepted with smiles and gratitude. Only one journalist was reluctant to accept the gift because her newspaper had a strict policy but I insisted that it was not a gift from a news source but from a new friend. This put her mind at ease and also started a beautiful friendship between us. I did not forget the men though, and decided to get cuff links for them but as journalists are known to dress for comfort one of them protested, “I will need a shirt to use them.” “He means give him a shirt too,” quipped another delegate and with this laughter erupted. The joke made me think about how much we share as neighbours, including our sense of humour. Everything during the trip went without a hitch, expect when it came to pronouncing some of the names. While counting the members of the delegation on the bus, at one point I said only Parveen is missing. A female journalist was quick to correct me politely,

“Mr Praveen, not Parveen.” The visit by the journalists from India really opened my eyes to all the things we share in common and how little the differences between us are. We speak the same language almost, we look similar and when we hang out with each other, we usually end up making the same jokes. The interaction also opened my mind and since they left I have started reading about India beyond what news channels throw at me and have also gotten books about Hinduism and Sikhism.

The differences between India and Pakistan perhaps could then be called political and I feel if the governments on both sides work towards recognising what makes us similar instead of what sets us apart, maybe we can overcome the hostile history that the two nations share.