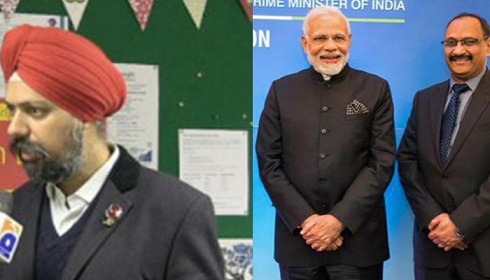 LONDON: Britain’s first turban-wearing Sikh parliamentarian Tanmanjeet Singh Dhesi has said members of the Bharatiya Janata Party (BJP) and Rashtriya Swayamsevak Sangh (RSS) are threatening him and campaigning against him in general election campaign because he spoke up for human rights of Kashmiris and other persecuted communities in India and elsewhere.

Tanmanjeet Singh Dhesi became the first Labour MP three years to take oath in parliament wearing Sikh turban. The Sikh MP has come under attack from Indian government supported group called Overseas Friends of BJP (OFBJP), headed by its leader Kuldeep Shekhawat. The BJP and RSS’ front group has attacked 50 Labour MPs for supporting the people of Kashmir and demanding right of self-determination for them.

BJP and RSS activists have leafleted against Tan Dhesi MP in Slough urging Hindu voters not to vote for the Sikh MP just because he spoke many times for the rights of Muslims in Kashmir, Palestine and Myanmar. Talking to Geo News, Dhesi said that the Indian extremists in Britain belonging to notorious Indian extremist organisations RSS and BJP are spreading hate and sectarianism against Labour MPs. He said: “The RSS doesn’t want me to be in parliament because we fearlessly speak for human rights.” He said in reference to his intervention many times in the British parliament raising the issue of Kashmir. “They are spreading hate against the Labour party particularly the members who are raising their voice against the brutalities and violations of human rights either in Kashmir, Palestine, Myanmar or any other part of the world,” said Dhesi.

The Sikh politician vowed not to be blackmailed by BJP and RSS. He said: I will continue without fear. I don’t care being on the target list of BJP and RSS. I will continue to speak up for the right causes. It’s our duty to speak up for the rights of people in Kashmir, Myanmar and Palestine.” He said it was unfortunate that groups like BJP were spreading hate in countries like Britain where civil and political discourse is defined by tolerance and harmony.

He said the fact that BJP and RSS were targeting 50 Labour MPs showed that they were doing so with help from the Conservative Party which was benefitting from the hate campaign. He said the sectarian campaign was being run to divert Labour’s attention from the key issues like education, NHS, jobs, cuts of funding etc. Tanmanjeet Singh demanded the Prime Minister Boris Johnson to hold an independent inquiry to fix the responsibility of Islamophobia and foreigner extremists who are trying to intervene in the coming election. He said that Conservative party for years has ignored calls for inquiry into Islamophobia and racism within its ranks. The Sikh MP asked Prime Minister Boris Johnson to apologise to Muslim women for attacking them for their choice of dress. He said that Boris Johnson had made racist remarks against Muslims women and encouraged others to do the same. He said: “We are demanding since years that Tory party should distance itself from extremists because the women either from Muslim or any other religion have dignity and we all need to respect their dignity instead of throwing insulting words at them,” said Dhesi.

Tanmanjeet Singh Dhesi has called on Hindus, Sikhs and Muslims not to fall for the divisive tactics of religious hardliners, trying to wedge apart communities.