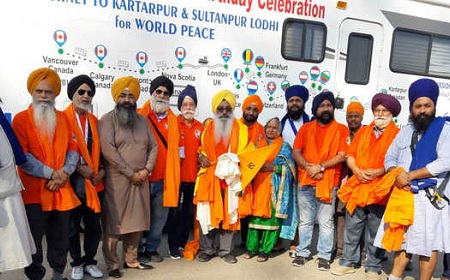 After covering Kartarpur Sahib and other Sikh shrines in Pakistan, a bus carrying Sikh pilgrims from Canada reached the holy city via Attari-Wagah border to culminate its journey for ‘world peace’, which is dedicated to 550th Parkash Purb (birth anniversary) of Guru Nanak.

As the bus carrying 11 pilgrims crossed over to India, Rajinder Singh Rubi, additional manager of Golden Temple, welcomed the pilgrims on behalf of the Shiromani Gurdwara Parbandhak Committee (SGPC). “After having night stay at Golden Temple, we will leave for the historic town of Sultanpur Lodhi, the final destination of the journey. Our mission was to spread Guru Nanak’s message of peace and brotherhood to the world,” said Gurcharan Singh Banwait, a devotee from Vancouver, while speaking to HT.

He said during the journey that started in August, the bus crossed the Atlantic Ocean on a ship and covered as many as 17 countries, including England, Germany, France, Italy, Switzerland, Austria, Turkey, Iran and Pakistan. “The bus has so far covered a distance of 2,100 km. We became ambassadors of peace across the globe. We spent a considerable time at every place to spread our message. In Pakistan, we stayed for 17 days,” Banwait said.

The bus has a kitchen, dining table, washroom and bedroom facilities. The trip has been organised by the International Punjabi Foundation, Canada, on a non-profit basis. Meanwhile, 547 pilgrims used Kartarpur corridor to pay obeisance at Gurdwara Darbar Sahib on Sunday . It was the second Sunday since opening of the corridor. The number reflects minor improvement in the footfall.