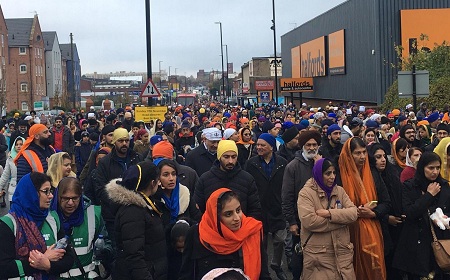 Coventry became a sea of vibrant colours as thousands of Sikhs took to the streets to celebrate a landmark date in the religion's calendar.

This year marks the 550th birth anniversary of Guru Nanak Dev Ji, Sikhism's founder and first guru, and processions are taking place across the globe, including right here in Coventry.

Sunday's event - known as a Nagar Kirtan - began at the Gurdwara Guru Nanak Parkash and then saw thousands of people, alongside drummers and a number of floats, walk through parts of Foleshill before returning to the Gurdwara.

The Nagar Kirtan was led by five Sikhs called the Panj Pyare or beloved ones, dressed in traditional attire, while one of the floats was carrying the Sri Guru Granth Sahib Ji, the Sikh’s holy scriptures, which for Sikhs is the embodiment of the living Guru ("teacher"). After arriving back at the Gurdwara Guru Nanak Parkash a special service of Kirtan (Sikh hymns), lectures and traditional folk singers was planned celebrating this momentous occasion.

The procession marks an important date in the Sikh calendar as they celebrate the 550th birth anniversary of Guru Nanak Dev Ji, Sikhism’s founder and 1st Guru. He was born on November 29, 1469, in Talwandi, Punjab, India, and was reknowned for his progressive outlook and teachings, always standing up for the downtrodden and expounding the need to earn an honest living from hard work and equality between men and women.

He spoke about the importance of women in society with one of his most famous quotes being: "how can anyone say bad things about women, when women are those who give birth to rulers and kings?"

Likewise he had an intense concern for the poor, hungry and needy, once spending all the money his businessman father had given to him to buy goods on feeding the hungry instead.