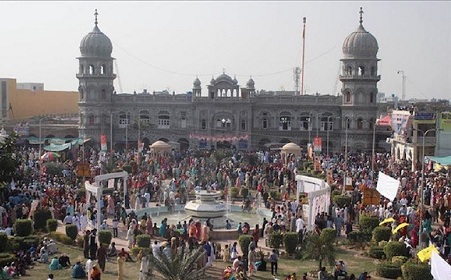 Twenty-five years ago, a Canada-based Sikh scholar created a flutter, claiming that he had discovered a monument in Turkish metropolis of Istanbul with an inscription of Nanak, the founder of Sikhism.

It was believed that Baba Guru Nanak, the founder of Sikhism, may have visited Turkey, as he is known have spent 11 years in the Middle East, visiting religious places and meeting Sufi saints. Following the scholar Devinder Singh Chahal’s discovery, a spate of researches aided by various Turkish universities and archaeologists, spanning over 13 years, finally found that the said monument, facing the Straits of Bosphorus, had inscription of Khnanak, in which hook of old Turkish letter ‘Kyey” was damaged.

It was actually a monument dedicated to Sultan Abdul Majid Khan (1839-1861). The monument is located at Kabatas Iskelesi, a pier adjacent to a mosque and Dolmabahce Palace, from where ferries depart for Uskudar and other places on the shore of Asian Continent. Historian Trilochan Singh has reported some indications about Guru Nanak’s visit to Cairo (Egypt) and Jerusalem. “While Nanak’s journey to Baghdad and Mecca are recorded, there is lack of solid evidence on his other journeys,” says Rohinee Singh, a researcher on Sikh issues. From Baghdad, the founder of Sikhism had proceeded to perform Hajj.

“Since Guru Nanak has not left any place from visiting, connected with Sufism and religious centers, there is every possibility that he might have visited the shrine of Hazrat Mevlana [Moulana] Jalaluddin Rumi in Konya, Turkey. Rumi’s philosophy was very prevalent not only in the Middle East but also in India,” she said. Recalling his visit to Istanbul in 1994, Chahal said he was actually attending a conference on biofuel, when he accidentally discovered the monument. “This monument is about 12 feet high and about 5 feet wide constructed in mortar. It is situated in a public park at the shore of the Straits of Bosphorus on European side. It has some inscription in Arabic/Persian Alphabet. When I looked at the inscription on this monument I found ‘Nanak’ inscribed at the end of the first line of its inscription,” he said.

Soon after publication of Chahal’s report, the Canada-based Institute for Understanding Sikhism commissioned a research, which with the help of the Faculty of Divinity of Marmara University and Department of Archeology in the Topkapi Palace Museum, finally deciphered the inscriptions in 2007. One of the researchers, Avtar Singh Dhaliwal mentions that he found that the Faculty had one of better section of Sikh studies than any other university in the world.

Dhaliwal said while researchers could not find any evidence of Guru Nana’s visit to Turkey, but it is hard to believe that he could have ignored to visit the tomb of Rumi. “Guru Nanak was in Middle East at least for 11 years. Therefore, there is every possibility that he would have visited the shrine of Mevlana in Konya, since he has not left any Sufi center which has not been visited by him. And he might have also met the Ottoman Emperor, Salim, in Istanbul or elsewhere, during his stay in the region, “he added in his research report, available with Anadolu Agency.

Near the old Baghdad railway station is the burial place of Bhai Mardana – Muslim devotee of Guru Nanak -- who had accompanied him to Hajj pilgrimage. “Here lies buried Mardana, a friend of the Guru named Nanak, who buried him here.” On his death, Guru Nanak returned to Kartarpur and stayed there until his death in 1538. Besides Mardana, Historian Taajudin Naqshbandhi, whom Nanak met in Iran also traveled with him to Mecca. He has recorded his meeting with Nanak in manuscript called Sayatho Nanak Shah Faqir, according to the Encyclopedia of Sikhs. Bhai Mardana is believed to have played an important role in the development of the Sikh religion. “Not only did he accompany Guru Nanak on his travels, he also played the rubab [musical instrument], while Nanak sang his divinely inspired poetry. Since their time, Muslim rubabi had been given the responsibility of performing the kirtan at gurdwaras – till the tradition was abruptly disrupted during Partition, “writes Abdul Majid Sheikh, author of the book, Probable Origins of Lahore and other Narrations.