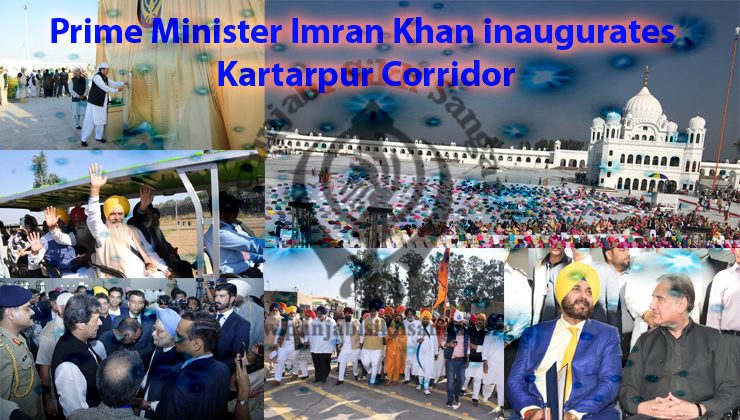 The Construction of Kartarpur Sahib Corridor and renovation of Gurdwara Darbar Sahib which has now become the world’s largest Sikh Gurdawara, has been completed in record time. The ground breaking ceremony of the corridor was held on 28th November last year. Earlier, Gates at Zero Point on Pakistan-India border have been opened for Sikh Yatrees coming from India. They are now being shifted to Gurdawara Darbar Sahib in Kartarpur by buses.

On his arrival, former Indian Prime Minister Manmohan Singh described the opening of Kartarpur corridor as a big moment. He hoped that Pakistan-India relations will improve enormously as a result of this initiative. The Indian Punjab Chief Minister Amarindar Singh also described this initiative as a major beginning and expressed the confidence that it will lead to more such steps.

The first batch of 10,000 pilgrims is set to perform their rituals within the compound of the Gurdwara after seven decades on the 550th birth anniversary of Baba Guru Nanak. Earlier, Prime Minister Imran Khan, in a message shared on social media, reiterated that Sikhs from all countries will travel to the world‘s largest Gurdwara. “This Gurdwara will strengthen local economy […] many jobs will also be created in travelling, religious tourism and hospitality sectors,” he stated. “Buddhists have also been coming to visit different religious spots in Pakistan.”

Dubbed as ‘Zero Point’, the Corridor including a bridge stretches for one-kilometer over the Ravi River flowing between the two countries. Pakistan has announced to allow visit of 5,000 pilgrims to the shrine everyday with additional numbers on special occasions, subject to capacity expansion of facilities.

As a special gesture, the government also waived off the requirement of passport and 10-day advance intimation for whole year, a move which has not received a warm welcome by India. The stunning white-coloured edifice of Gurdwara Baba Nanak stands tall as a symbol of peace and harmony despite a relation full of discords between the two bordering countries. The inauguration on November 9 coincides with with birthday of the country’s national poet and philosopher Allama Muhammad Iqbal, who in his poem ‘Nanak’ written in book Baang-e-Dara, holds the Sikh spiritual leader in high esteem for his monotheist beliefs.

Iqbal, in his verses ‘Phir akhir uthi sada Tauheed ki Punjab se – Hind ko ik Mard-e-Kaamil ne jagaya khwaab se’, means that ‘The voice of belief in Oneness of God rises from Punjab as a man with perfect attributes awakens the land of Hind from deep slumber’. The package of facilities has been set in place for the visitors, including a nine-marque village to accommodate the Sikh pilgrims coming from across the world. The regular visitors will be given a one-day pass and they will return the same day.

A Langar Khana inside the complex has a capacity to house around 2,500 pilgrims, who will arrive in after biometric registration at counters set up by the Federal Investigation Agency. The Government of Pakistan had acquired around 800-acre land and handed over the same to the Gurdwara management as a gift. Out of which, 42 acres were allocated for the construction of Gurdwara Complex and 62 acres for the agriculture purpose to meet the needs of the Langar Khana.

The Gurdwara has been built in record time of 10 months, with high quality construction along with white marble and imported tiles. The visitors will have a glance of Sikhs history at the museum set up in the vicinity where the photographs of Sikh religious leaders have been put on display. A 12-bed hospital has also been established for any health emergency for the pilgrims.

Around 250 cameras will have round-the-clock vigil for foolproof security and effective monitoring of the complex, while 1,500 staffers have been assigned for the facilitation of pilgrims. Money exchange outlets and souvenir shops have also been set up for the facilitation of visitors. As a monument of love, peace and affinity, Gurdwara Baba Guru Nanak awaits his followers from around the globe to arrive at the soil of Pakistan – also the Dharti of Nanak (land of Nanak).