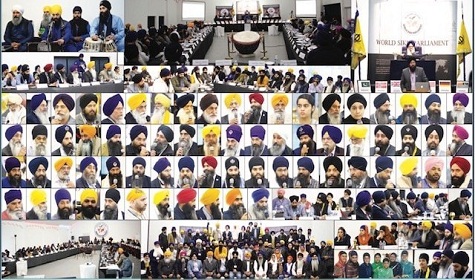 DERBY (UK) – Over 125 World Sikh Parliament delegates and observers from across the globe came together over a two-day session in Derby, UK deliberating on the challenges facing the Sikh Nation. Recognizing its responsibility to lead and represent the Sikhs at a global level, based on the mandate of the Sarbat Khalsa held in the Sikh homeland in November 2015, and acting on the directions of the Jathedar of Sri Akal Takht Sahib, Bhai Jagtar Singh Hawara, the World Sikh Parliament appointed councils addressed the myriad challenges while working towards solutions for the Sikh Nation.

The sessions were dedicated to founder of the Sikh faith Sri Guru Nanak Ji, as well as the martyrs of the nation who have made the ultimate sacrifice in the ongoing struggle for national self-determination. The separate Councils dealt with matters ranging from religious affairs, politics, human rights, education, internal affairs, as well as cultural and linguistic matters, the Parliament is organized to address the core needs of the Sikh Nation.

Proceedings were commenced in accordance with Sikh custom, with collective prayers and the blessing of a Hukamnama of the Sri Guru Granth Sahib. Members of the Parliament, comprising a wide cross section of elders, professionals, academics, students and other seasoned campaigners for Sikh rights, were also relayed a special message from Jathedar Bhai Jagtar Singh Hawara, in which he urged them to pursue the rights of Sikh nation in a selfless, principled but determined manner.

Key office bearers of the Parliament were announced, including that of the Speaker, General Secretaries, Regional and National Coordinators, as well as those responsible for driving forward the work of the individual Councils – all of which report ultimately to the general body of Parliament. A wide variety of key Resolutions were adopted by the plenary session of the Parliament, reflecting the array of issues deliberated on. Copies of all of those resolutions can be obtained from the General Secretaries. They included action points to:

1. Promote Sikh educational initiatives and bring awareness using traditional and mobile media platforms. 2. Develop educational strategies for teaching Sikhi within families, as well as to non-Sikhs around the world. 3. Encourage Sikh academia to shun anti-Sikh forces actively trying to infiltrate academic institutions and instead work for the benefit of the Khalsa Panth. 4. Promote global recognition of the Sikh nation as a key stakeholder in preserving peace in South Asia and procure security guarantees for Sikh homeland 5. Increase Awareness of serious human right violations of the present and the past with United Nations, world bodies and countries. 6. Promote the free exercise of the Sikh nation’s right to self-determination, including marking 29th April 2020 as Khalistan Day and encouraging Sikhs globally to participate in the Punjab Referendum 2020 scheduled for November next year. 7. Preservation of Sri Guru Granth Sahib Ji’s historic and old saroops with honor and respect using modern mechanisms of authentication, and prevention of un-Sikh practices relating to them. 8. Support existing organizations documenting the genocide of Sikhs in India 9. Create awareness on the detrimental impact of pesticides and other chemicals in use in Punjab causing cancers and other diseases violating their right to a healthy living. 10. Identify schools in Punjab where speaking Punjabi is banned and bringing about a change this unacceptable policy. 11. Develop a working team to look to establishing a World Sikh Bank 12. Support and coordinate jointly with Sikh charities working in Punjab. 13. Procure the global designation of the RSS as a terrorist organization so that it is banned internationally. 14. Support all Dalits, Mool Nivasi, Christians, Muslims, Buddhists, Kashmiris and other genocide targets of Brahmanism.. 15. Establish a working global Sikh Press Association to assist Sikh communities around the world. 16. Create an inclusive Advisory Council, bringing together talented Sikhs from around the world, to support the work of the World Sikh Parliament. 17. Resolve to work with internal and external Sikh organizations to bring them on to a common platform 18. Resolve for the betterment and progression of the khalsa panth, supporting unity and mutual respect across panthic institutions and sikhs with the sikh rehat maryada as a baseline and doing efforts for pro-active parchaar in Punjab and across the world.

An appeal was made to other Sikh organizations and individuals to join the platform as members or advisors to the parliament which presently holds 130 members from 25 countries and 50 different organizations. The delegates from around the world, as well as many other notable Sikhs who attended as observers, spoke of the excellent setting of the appropriately-named Baba Banda Singh Bahadur Hall at Sri Guru Singh Sabha in Derby. The entire event was conducted in an optimistic environment with the outcomes broadcast during a televised session on Sunday. The event also afforded an excellent networking opportunity for all the delegates who left the venue with a sense of purpose, founded on a collective mission to fulfil the wishes of an entire nation. The World Sikh Parliament mandated by the Sarbat Khalsa in 2015 meets annually to discuss and implement solutions to challenges faced by the Sikh Commonwealth, while seeking and promoting Panthic Sikh organizations and individuals with a special focus towards developing young Sikh men’ and women working towards the Chardhi Kala of the Panth.