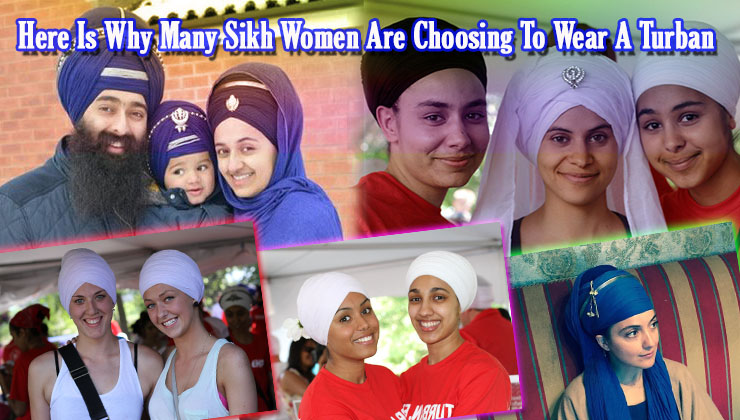 It's common to see men across the world wear a turban as a part of their faith in Sikhism. But you may have noticed many Sikh women also sporting the turban. What led to this change? Just a handful of woman looking for equality.

In Sikhism, a turban represents the faith as much as the uncut hair underneath it. It began with the edict handed down by the 10th and last Sikh Guru, Guru Gobind Singh, who formed the Khalsa, a brother, and sisterhood of baptised Sikhs. He set down the five K's of Khalsa (a pure community of Sikhs), which include Kesh (uncut body hair), Kangha (a wooden comb for the hair), Kara (an iron bracelet, also known as Kada), Kachera (100% cotton tieable undergarment) and Kirpan (an iron dagger large enough to defend oneself and others). Uncut hair, or Kesh was one of the things the Guru stated the followers of Sikhism should enforce.

The turban, a headgear previously only donned by the teachers soon became a feature with common folks. Guru Gobind Singh said that this turban was a mark of equality within the religion, establishing that all Sikhs were equal in the eyes of God and this is what set them apart. However, men initially adopted turbans and women just chose to wear a chuni.

As the religion spread across the world and grew, women from the faith decided to adopt the turban as well. The religion reached people who were converting to Sikhism, and went back to the fundamentals of the religion. Especially Amritdhari women who chose to follow traditional ideologies that state that all Sikhs must leave their hair untouched. When the rule of uncut hair was put down, it included bodily hair, but because of society's pressures, women were expected to 'clean' the rest of the body except their long luscious hair.

However, this wave of women donning the turban came as a move to become equal within the religion. The need for women to be equal to the men in the community, to wear turbans like the warriors did, paved this feminist movement. Doris Jakobs, a professor of religious studies at Waterloo University, Canada, told BBC that she carried out research into the area of this subject and found that this tradition is adopted mostly by women living outside their traditional homeland of Punjab who wish to be recognised for their religion.

"This is something that the younger generation in the diaspora are doing. It's a sign of religiosity in which some Sikh women are no longer content with just wearing a chuni (headscarf). Wearing a turban is so clearly identifiable with being Sikh and so women now also want that clear visual sign that they are also Sikh as well. It's a play on the egalitarian (equality amongst all) principle of Sikhism.

Another researcher, Jasjit Singh at Leeds University, who has spent years interviewing women who have begun to wear the turban told BBC that there are many reasons behind this religious sentiment. "Some say it helps with meditation and others say its part of a Sikh's uniform," he said. Women have picked this attire because they believe it brings them closer to God, keeps them equal to men and is what Guru Gobind Singh meant when he asked 'all' Sikhs to wear a turban. "I found that many young girls see this as a way of reclaiming equality within the religion. The Punjabi community is still very patriarchal but these girls tell me that Guru gave a uniform to all Sikhs - and so why shouldn't they wear the turban as well. "

Essentially, the movement is all about breaking gender barriers, standing shoulder to shoulder with the men who represent the community and taking back from the gender norms set for women. Turbans aren't 'masculine,' women with body hair aren't 'manly' and it's time we spread this powerful message.

One of the first women to publicly talk about the power of the turban was British model, life coach and motivation speaker, Harnaam Kaur who embraced Sikhism at the age of 16. After being diagnosed with PCOS (polycystic ovary syndrome) at 12, she decided to embrace the body hair that was a part of her condition, put on a turban and even decided to grow a beard, letting her facial hair grow naturally. Her revolutionary decision changed the way media views gender and social construct, leading to her being on the cover of Teen Vogue in 2017! Women who choose to wear a turban often leave their body and facial hair untouched.