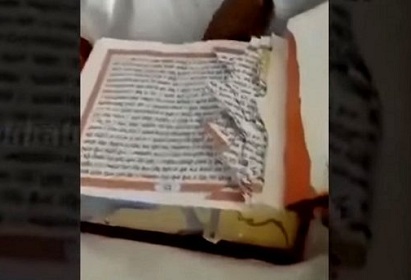 AJMER, Rajasthan—An extremely unfortunate incident of sacrilege of Sri Guru Granth Sahib Ji has come to fore in a Gurdwara Sahib situated in Ajmer district of Rajasthan. A video has gone viral over social media in which the staff of Gurdwara Sahib could be seen passing arguments with the accused persons.

However, the condition of desecrated saroop of Sri Guru Granth Sahib Ji clearly depicts that it was not the cow’s work instead it’s a deliberated sacrilege.