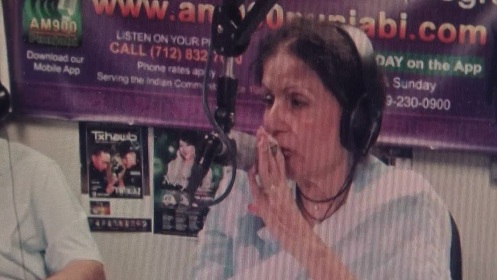 FRESNO, California (KSEE) – Mourning continues following the loss of a prominent radio host and Sikh community member in Fresno over the weekend.

Guddi Sidhu was killed on Sunday. Police said she lost control of her car and crashed. It happened around 2 p.m. on Ashlan and Cornelia Avenues. Sidhu was a leader in the Sikh community and people who knew her said her mission was helping others.

“Guddi was a fantastic lady. Kind, courteous, a lot of class,” Tony Donato the manager at KBIF said. Sidhu had a weekly radio show and had known Donato for years. He said her show was not only listened to across the country and viewed by thousands on Facebook, but it was also broadcast in India and was a longtime staple at the station.

“32 years. It’s a tremendous loss because she was like the concrete of our programming,” Donato said. Sidhu was also the vice president of the Sikh Institute of Fresno and extremely active in the community. “She was just passionate about helping the community, she was so passionate and committed to teaching Punjabi to the youth,” said Ike Grewal, a member of the Sikh Council of Central California.

He added Sidhu wanted the younger generations to know their roots. “She started many of the Punjabi schools for the children growing up here. That way they would know their mother tongue.” Investigators are still figuring out what led up to the crash. They said Sidhu was driving south on Cornelia when she crossed into the opposite lane and hit a power pole wire flipping her car. She was killed on the scene.

Donato said she was on her way to do her radio show when it happened. The Sikh Institute will be holding events at 6 p.m. every day this week, inviting the public to stop by and pay their respects to Guddi Sidhu.