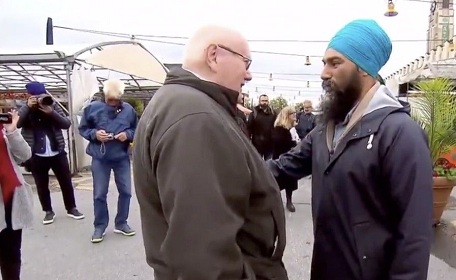 Amrit Kaur says she wasn’t surprised to hear that New Democrat Leader Jagmeet Singh was accosted at the Atwater Market Wednesday and told to remove his turban.

The man told Singh he would “look Canadian” if he “cut off” the religious head garb. Kaur called the interaction a sign of the times in Quebec. “It’s just the trickle-down effect of the politics,” said Kaur, a Sikh woman who is challenging Quebec’s religious symbols ban in court. “To some people, no matter how much you integrate, no matter how hard you try, you’ll never be Canadian, you’ll never be a Quebecer, you’ll never shed that immigrant label. It’s sad.”

Kaur studied to be a teacher in Quebec but moved to British Columbia to work because her turban violates the province’s secularism law. She is a plaintiff in a legal challenge against the bill and she says it has made her the target of online smears. “I get hate mail on the regular, people who don’t even know me send me these awful messages on social media,” said Kaur, the Quebec vice-president of the World Sikh Organization’s Canadian branch. “I look at these profiles and I see that the same people telling me to go away are themselves parents. They seem to forget that I am someone’s child, they forget that there’s a person under my turban.”

For the most part, Kaur says her experiences in Quebec — the place she was born and raised — have been positive. Jagdish Singh Sidhu says he had universally good experiences as a Sikh living in Montreal. But he also admits that some of the rhetoric he has heard around Quebec’s religious symbols ban has made him uncomfortable.

“People are getting tense,” he said. “We love living here, we are proud to call ourselves Canadians. What happened to (Singh) is very unfortunate. It’s not right.” When Singh was told to “look Canadian” Wednesday, he gave a measured, friendly response to the man.

“Oh, I think Canadians look like all sorts of people,” said Singh, who was in Montreal ahead of the leaders debate on TVA Wednesday night. “That’s the beauty of Canada.” Hanadi Saad works for a group that tracks hateful incidents against Muslims in Quebec. After the government tabled its secularism bill last spring, she said her group fielded 40 complaints in under two months.

“I can say I’m not surprised at what happened to Mr. Singh, not at all,” she told the Montreal Gazette. “It wasn’t like this before. One woman who came to us, she was with her baby when she was attacked in a Costco parking lot. Physically attacked for wearing a hijab. “People call us terrorists, they tell us to go back to Saudi Arabia, they single out Sikh men and women, too. We get two to three complaints each week.”

Kaur, who teaches English in Surrey, B.C., she says she will always consider herself a Quebecer. “In British Columbia, I keep slipping up and calling the streets “Saint this” and “Saint that” just like back home,” Kaur said. “I remember during the referendum debate, when I would visit Ontario and they would complain about Quebec separatists, I would get very defensive. I am a Quebecer! But sometimes it doesn’t feel like everyone agrees.”