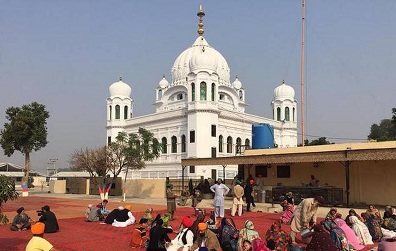 Former Prime Minister Manmohan Singh has agreed to be a part of the first ‘jatha’ (batch) of pilgrims to the Sikh shrine of Kartarpur Sahib across the border in Pakistan, while President Ram Nath Kovind and Prime Minister Narendra Modi will participate in the 550th birth anniversary celebrations of Sikhism founder Guru Nanak Dev, Punjab Chief Minister Amarinder Singh said on Thursday after formally inviting them.

He, however, made it clear that his government’s ‘jatha’, of which Dr. Singh will be a part, will visit only Kartarpur Sahib and not attend the opening ceremony of the Kartarpur Corridor organised by the Pakistan government. Last week, Pakistan foreign minister Shah Mahmood Qureshi announced that their government had extended an invitation to Dr. Singh.

Capt. Amarinder Singh, in a statement, said: “There is no question of me going to Pakistan for the Kartarpur corridor opening and I feel Dr. Manmohan Singh will not go as well. There was a huge difference between visiting Pakistan and going to the Gurdwara through the Corridor.” The clarification came after a section of the media reported that the Chief Minister and Dr. Singh had accepted the Pakistani invite.

Kartarpur Sahib is a revered shrine of the Sikh community where Guru Nanak Dev settled down and lived for 18 years until his death. Though it is merely 4.7 km away, pilgrims from India have to take a circuitous route through Lahore to reach there. In November last, India and Pakistan agreed to build the Kartarpur Corridor to connect Kartarpur Sahib with Dera Baba Nanak Sahib on the Indian side.

Capt. Amarinder Singh has requested President Kovind and Prime Minister Modi to attend the function of the opening of the corridor in Punjab. “The Chief Minister had urged them both, in particular, to participate in the Kartarpur Corridor opening at Dera Baba Nanak and the November 12 main programme at Sultanpur Lodhi in Kapurthala,” said the government spokesperson.

Ahead of Guru Nanak Dev’s birth anniversary or Parkash Purb, the State government has planned a series of events from November 5 to 15, including a plan to send an all-party delegation to Nankana Sahib, the birthplace of Guru Nanak Dev that is now in Pakistan. In his meeting with Prime Minister Modi, the Chief Minister is learnt to have requested “Mr Modi’s personal intervention to give clearance for a jatha to visit the Nankana Sahib as well”.