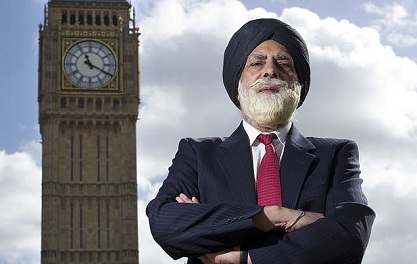 The peer, a Sikh voice on the Today programme for 35 years, said the BBC tried to block him from discussing a Guru

Lord Singh of Wimbledon has quit BBC Radio Four's Thought for the Day after more than three decades, blasting the over-sensitivity of the corporation's bosses.

The peer, who has been a Sikh voice on the Today programme for 35 years, said the BBC tried to block him from discussing a guru from his religion who fought against the forced conversion of some Hindus to Islam in 17th century India. A celebrated interfaith activist, Indarjit Singh hit out at the BBC for its 'prejudice and intolerance' after he was told the broadcast, which did not criticise Islam, may have offended Muslims, reported The Times.

He also hit out at the BBC's 'misplaced sense of political correctness' that forces contributers to only say non-controversial statements that no listener could complain about. Lord Singh told the newspaper: 'It was like sating to a Christian that he or she should not talk about Easter for fear of giving offence to the Jews.'

Lord Singh of Wimbledon, 87, was let go after he threatened to quit instead of having his religious teachings insulted. He was not informed of anyone listening being offended by his broadcast. After leaving, Commission for Racial Equality advisor Lord Singh complained about his treatment but a review by BBC director of radio James Purnell rejected his complaint.

Lord Singh said: 'The need for sensitivity in talking about religious, political or social issues have now been taken to absurd proportions with telephone insistence on trivial textual changes right up to going into the studio, making it difficult to say anything worthwhile. 'The aim of Thought for the Day has changed from giving an ethical input to social and political issues to the recital of religious platitudes and the avoidance of controversy with success measured by the absence of complaints.'

He said he believed Sikhism founder Guru Nanak and even Jesus Christ would not be 'allowed near Thought for the Day' if they were alive today. A BBC spokesperson said: 'Thought for the Day is a live, topical segment and it is not unusual for editorial changes to be made so that it reflects the biggest news stories of the day.

'We disagree with Lord Singh and don’t recognise his characterisation of Thought for the Day.'