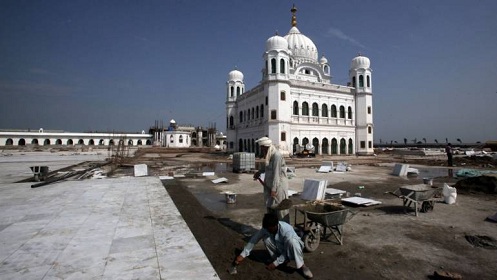 Kartarpur corridor to be opened for Indian Sikh pilgrims on November 9: Pakistan official

Project Director Atif Majid made the announcement during the maiden visit of Pakistani and foreign journalists to the proposed Kartarpur corridor in Narowal, some 125 km from Lahore, amidst fresh tension between India and Pakistan after New Delhi revoked Jammu and Kashmir's special status.

Majid said so far 86 percent of the work on the corridor has been completed and it will be opened to pilgrims on November 9. The corridor will connect Darbar Sahib in Kartarpur with Dera Baba Nanak shrine in Gurdaspur district of Punjab and facilitate visa-free movement of Indian pilgrims, who will have to just obtain a permit to visit Kartarpur Sahib, which was established in 1522 by Sikh faith founder Guru Nanak Dev. related news

Pakistan is building the corridor from the Indian border to the Gurdwara Darbar Sahib in Kartarpur while the other part from Dera Baba Nanak in Punjab's Gurdaspur district up to the border will be constructed by India. Both countries have agreed that Pakistan would allow 5,000 Sikh visitors per day into the country through the corridor, which will also be the first visa-free corridor between the two neighbours since their independence in 1947.

Majid said some 76 immigration counters have been set up to cater to 5,000 Sikh pilgrims from India every day. And for 10,000 pilgrims visiting here daily, 152 immigration counters will be set up. He said that initially 5,000 Sikhs from India will come daily and later the number will rise to 10,000. Tension between India and Pakistan has escalated after New Delhi revoked Jammu and Kashmir's special status. Reacting to India's move on Kashmir, Pakistan downgraded diplomatic ties with New Delhi and expelled the Indian High Commissioner.

Pakistan, however, repeatedly said that the opening of the Kartarpur corridor will not be hit by the current tension with India. The visiting Indian Sikhs will have to bring their passports with them and they will be issued corridor pass. On return, they will receive their passports from immigration counter after returning the pass.

Airport-like facilities will be provided to the pilgrims who will come here by bus, he said. “Finger prints will be taken of every Indian and Pakistani Sikhs entering the Kartar Sahib,” he said. The journalists were told that the visiting Sikh pilgrims will be provided free food and medicines by the Pakistan Gurdwara Sikh Parbhandik Committee. The security of the corridor will be provided by provincial paramilitary forces Punjab Rangers.