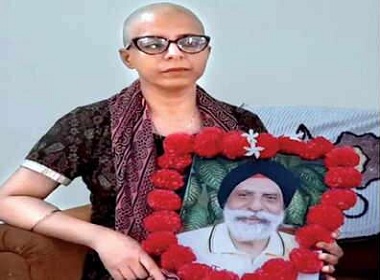 JHANSI: It’s been 25 days since 82-year-old retired government employee, Jogindar Singh, was found dead in his Sundar Vihar residence in Jhansi, under mysterious circumstances. His daughter, Puneet Singh, cried foul and demanded arrest of his neighbours and named them in her complaint.

As a mark of protest, she shaved her head and took a pledge that she would not grow her hair till the culprits are arrested.

Jogindar Singh was found dead in the backyard of his house on August 22. Puneet performed the last rites of her father on August 23 and alleged he was murdered by their next door neighbours, who had been eyeing her father’s property .

Taking action on her complaint, police registered a named FIR against Virendra Khandelwal and his son Rajive, under sections 302, 506, 34 of IPC, on August 25. Puneet has been demanding the arrest of Khandelwals, and shaved her head in protest.

I am a Sikh and hair has religious importance in our religion. Still, I decided to do so because my shaved head reminds me that I have to fight for justice. I have taken a pledge that I will continue shaving my head daily till my father’s murderers are arrested,” she said.

Puneet has also been posting her pictures on social media and has also sent a petition to the minority commission. Puneet, in her mid-forties, is a social activist. She teaches deaf and dumb and helps them in getting jobs.