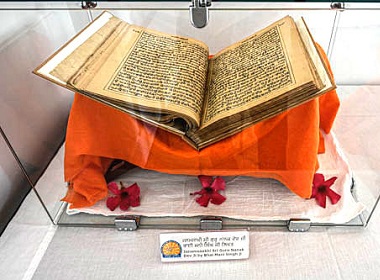 PACOIMA, Calif. — Historical artifacts associated with Guru Nanak Dev and the Sikh empire were the focus of an interesting exhibition held at the Khalsa Care Foundation on Aug. 24.

Some of the items from the era included a brass jug with a handle (kamandal), a brass tumbler, a jug (gagaar) and a hand-written story of birth (janamsakhi) of Guru Nanak Dev, in flowing Gurmukhi, by Bhai Mani Singh, the 18th-century Sikh scholar and martyr.

Also on view were coins from the 15th century. Guru Nanak Dev traveled extensively and when in Nepal he was honored with coins of his likeness being minted and put in circulation. Armaments used in the reign of Maharaja Ranjit Singh – swords and daggers – were part of the display of historical items.

The traveling exhibition made history come alive for all those who were able to view it, noted a press release.