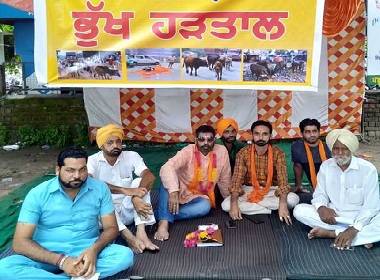 Hunger strike by Shiv Sena outside the DC office until all stray cattle are removed from streets and roadsides.

In protest against the “lackadaisical attitude” of the district administration in capturing the stray cattle that led to two deaths a few days ago, Shiv Sena state president Harpreet Lalli along with senior leader Naresh Babla Chopra today started an indefinite hunger strike outside the DC office until all stray cattle are removed from streets and roadsides.

The relatives of the two persons who lost their lives due to stray bull also joined the dharna. Lalli said rattled by deaths of citizens due to stray cattle, the Shiv Sena, Punjab, along with social, political and religious organisations, NGOs, senior citizens, lawyers and traders had submitted memorandums to the administration to control the menace, but to no avail.

He said, “The government collects crores of rupees as ‘cow cess’, but is not spending on cows and other stray cattle.” Earlier, a delegation of district lawyers led by Rajbir Grewal, former president of the District Bar Association, submitted a memorandum to the ADC in this regard and another group of lawyers led by Inderjit Singh Sau said lawyers of the SAD legal wing would file a suit against the administration and Municipal Council, Sirhind, Fatehgarh Sahib, for causing death of two residents due to stray cattle.