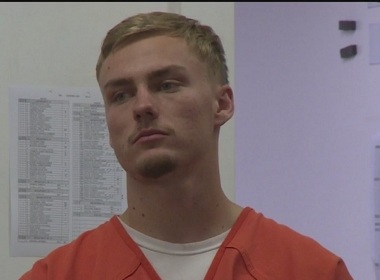 It was a brief, but emotional appearance in court for the family of a young Tracy man accused of killing a 64-year-old man at a Tracy park just over a week ago.

Dressed in an orange jumpsuit, with his hands cuffed, 21-year-old Anthony Kreiter-Rhoads pleaded “not guilty” to killing 64-year old Parmjit Singh, a Sikh man who was walking through Gretchen Talley Park last month when police said he was stabbed to death.

“We love him so much. We can’t live without him,” said Singh’s daughter. Days later, officers arrested Kreiter-Rhoads at his home after surveillance cameras captured a man running near the park at the time of Singh’s murder. That video and other evidence led police to name him as their suspect.

“It is shocking,” said family friend Lisa Alvarado. “There are many people who have known him a long time and we’re standing by his side.” Friends, family and even one of Kreiter-Rhoads’ former high school teachers gathered outside the courtroom. They painted a far different picture of the man now accused of murder.

“Anthony is a very lively young man. He’s an athlete in school. He’s intelligent. He’s always been kind and respectful as long as I’ve known him,” Alvarado said. They described Kreiter-Rhoads was a “math whiz” at West High school, a member of the Space and Engineering Club and a standout athlete who went on to Delta College following his graduation in 2016. He was currently waiting to ship off with the Marines. “They are deeply saddened and would like to extend their deepest condolences to the family of Mr. Singh’s,” said Alvarado.

Singh’s family didn’t want to talk on camera after the arraignment. “The place he died. I go around every day and I stop there and see what happened,” his daughter said in an interview following Singh’s funeral.

She and her husband told CBS-13 last week they don’t understand why Kreiter-Rhoads would attack such a kind and gentle man. “He ruined his life and our life,” said Harnek Singh-Kang, Singh’s son-in-law. They’re still seeking answers about the deadly attack. Singh-Kang said his father-in-law was his “treasure” after he lost his own father.

Kreiter-Rhoads was assigned a public defender. He’s expected back in court on September 16th.