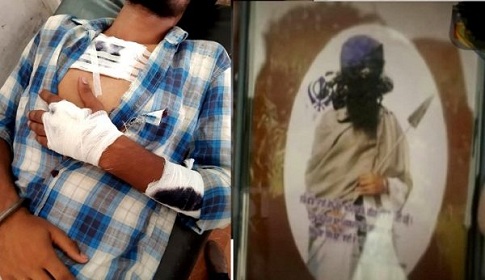 LUDHIANA, Punjab— A clash erupted among the Punjabi and UP-Bihar students after a Punjabi youth sitting in the canteen of Guru Nanak Engineering College (Ludhiana) got thrashed by 60-70 students hailing from Uttar Pradesh and Bihar. Blackening of Sant Jarnail Singh Khalsa Bhindranwale’s photo is said to be the main cause behind this violent clash.

Sources have informed that a quarrel had occurred among Punjabi and UP-Bihar students over the menu list of the college canteen around five days ago. During this incident, manhandling was witnessed, but the management committee of GNE intervened and sorted out the quarrel at that time.

After three days, the students of UP-Bihar blackened the photo of the great Sikh of 20th century Sant Jarnail Singh Ji Khalsa Bhindranwale installed in the hostel. Following this, the Punjabi students complained to the Principal of their college and they were promised of investigation into this incident.

However, around 60-70 students of UP-Bihar attacked a Punjabi youth sitting in the college canteen during the morning hours on September 2 without any reason. Following this, a clash erupted among the Punjabi and UP-Bihar students. More than a dozen youths got injured in this clash, who have been admitted in the Civil Hospital of Dehlon.

Speaking to media, Punjabi students of B.Tech second year Sukhmanpreet Singh, Balwinder Singh, Manish and Kiranvir Singh informed that the students of UP-Bihar keep on troubling and instigating them. Meanwhile, it has also come to fore that the cigarette smoking has become a common practice in the hostel of Guru Nanak Engineering College.