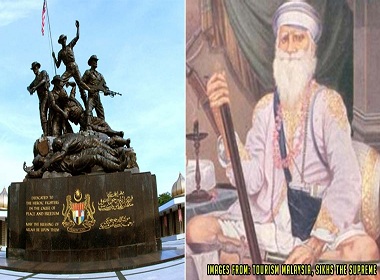 With over 130,000 members, as well as the largest number of professionals compared to any other group in Malaysia, the role of our Sikh community in the development of our country is not to be understated. With big names such as Santokh Singh (footballer), Amar Singh (police officer who investigated Najib in the 1MDB case), and of course, the late Karpal Singh (lawyer), Sikhs have contributed to our history in more ways than one:

“This is the Punjabi spirit: we don’t work. We serve. Whatever we do, we do it with passion, drive and love. You don’t call that work. You can pay, that’s by the way.”

And their services to our country as Malaysians are not just limited to peacetime; in fact, 33 of the 232 names on our Tugu Negara are Sikh!

But who were the first Sikhs in then-British Malaya, and more importantly, how did those names end up on our Tugu Negara? It all started with a Jedi freedom fighter from 19th century Punjab named Bhai Maharaj Singh.

As a young boy, Nihal ji started out at his master Baba Bir Singh’s dera (Sikh monastery) as a cook in the dera’s langar (kitchen). He was given the name Bhagvan Singh after being initiated into the almost mythical Order of the Khalsa (or Sikh ‘saint-soldiers’, who several people cite to have been the inspiration behind the Jedi Order in ‘Star Wars’). Even their symbols are similar! (left: Khanda of Sikhism, right: symbol of Jedi Order).

Like the Jedi, the original Khalsa were not just religious men and women, but also ‘guardians of peace and justice’; Baba Bir Singh’s own dera was said to have been ‘practically a military camp with 1200 musketmen and 3000 horsemen.’