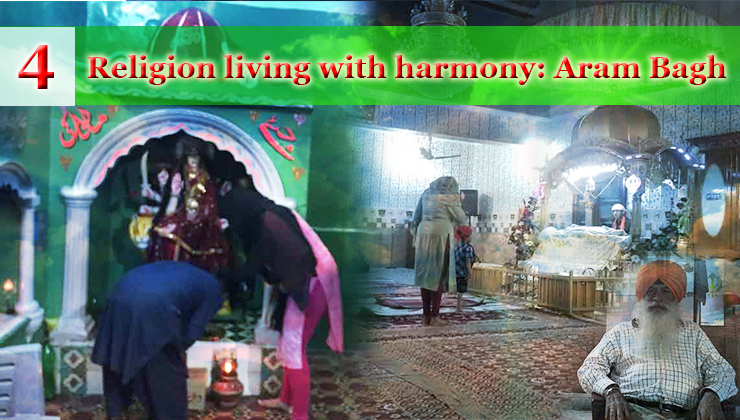 Sitting on a wooden bench placed against the old stone wall of the Rameshwar Mahadev Mandir in Saddar Town’s Aram Bagh neighbourhood, 72-year-old Motiram gestures to the nearby vendors to be quiet in respect of the Azaan, the Islamic call to prayer, being issued from the nearby Jamia Masjid.

After the Azaan ends, he advises one of the vendors to go offer his evening prayer. “I’m waiting for the maharaj [temple custodian]. I’ll take care of your things,” Motiram tells the vendor, who then leaves his cart in the care of the old man and heads to the mosque. The masjid and mandir are located across from each other where Panjrapur Street meets Ram Talao Road. Every evening Motiram participates in the worship at the temple. He sometimes waits in front of the mandir if the maharaj is running late.

During that time Motiram usually talks with the shopkeepers, vendors and other people he is familiar with about daily routines, business activities and the bygone eras. He is renowned in the area for his humour, and the people call him Saeen, a term of respect in the Sindhi language. “Every religion teaches us humanity. We have to respect everyone’s beliefs regardless of what our adherences are,” he says. Motiram has been living in the area with his family since 1960. He believes Aram Bagh to be one of the most diverse localities with a long history of pluralism that has been thriving in the neighbourhood for many decades.

Just opposite the masjid and mandir stands one of the largest Sikh temples, the Sri Guru Nanak Satsang Sabha Gurdwara, which adds to the reputation of Aram Bagh being the stronghold of diversity and pluralism in the heart of Karachi.

Inclusiveness
Karachi has always been a multicultural city, so almost all of its inhabitants believe in inclusiveness and embrace the traditions and customs of different ethnic and religious groups. This is why there are a number of areas across the metropolis serving as shining examples of coexistence. Aram Bagh is just one of them. The neighbourhood has turned mostly into a furniture market, where thousands of dealings are carried out on a daily basis.

Even though the locality cannot be categorised as a purely residential area any more, there are many buildings here that house different families from Muslim, Hindu, Sikh and Christian backgrounds. “Since Partition, people with different religious backgrounds have been living here,” says 69-year-old Girdhari Lakhwani, a local Hindu community leader. “Before Partition, the largest Gaushala [cow ranch] was also situated in Aram Bagh, as well as tens of mandirs in the old buildings, some of which still exist.”

Living together
“The original population of the area was Hindu. However, after Partition, a majority of the Hindu families chose to leave for India,” says Lakhwani. But those who stayed behind are still here. “At present, around 40 Hindu families reside in Aram Bagh. And some families have moved to other parts of the city.” He says Hindus have good relationships with other communities. “Most Hindus are business partners with Muslims. They even attend each other’s social gatherings, especially when someone gets married or passes away.”

Lakhwani says he has never witnessed someone disturbing Hindus. “We understand that both communities have been living here together in harmony for decades, so none of us can even think of anything against each other.” He recalls that the first custodian of the Rameshwar Mahadev Mandir, Arjandas T Aswani, was born in Aram Bagh; he was educated at the NJV School, where he later served as a teacher. “Aswaniji was on good terms with the then imam of the Jamia Masjid. They used to sit together to discuss social issues.”

The mandir
According to the commemorative plaque put up inside the Rameshwar Mahadev Mandir, the temple was built by Mrs Hajee Bai in memory of her late husband Ochi Ram, son of Mangat Ram. But the date of its construction is missing from the sign. “The mandir is not too old. It was built in the early 1920’s or a decade later,” says Lakhwani. In one corner of the temple is a small library containing books of famous Sufis, including Shah Abdul Latif Bhittai, Bulleh Shah, Sachal Sarmast and Fariduddin Ganjshakar

“We believe in humanity, love and respect. Such lessons were also in the teachings of Sufis. Thus, we recommend these books to our youth for study.” Compared to the Hindu population, the temple is small in size. “On our application, officials of Sindh’s religious affairs department visited the mandir and promised to provide funds for renovation and the construction of additional rooms.”

Love for all
Just like the Hindu community, Sikhs also live in peace and harmony in Aram Bagh. However, Sikh families are fewer in number. “Between 200 and 250 people visit the Sri Guru Nanak Satsang Sabha Gurdwara every week, while 10 to 15 families permanently live in Aram Bagh,” says Sardar Hira Singh, the temple’s custodian. Besides the Sikh community, a number of Nanakpanthi Hindus also visit the gurdwara. “We believe in love for all and hate for none. This is all that Sikhism teaches us,” says Singh.

Since his childhood, Singh has had good relations with the Muslim community. “When I was a child, I frequently visited my Muslim friends. We shared our food and drink. There was no perception of belonging to different religions.”

The gurdwara
Talking about the Sri Guru Nanak Satsang Sabha Gurdwara, Singh says: “The Sikh temple of Aram Bagh was built by Sadhu Singh, who was the additional commissioner of Karachi, in 1935.” After Pakistan came into being, the gurdwara went under the control of the Hindu community. But after 2016, the Supreme Court returned the temple, which is one of the biggest gurdwaras of Karachi, to the Sikh community.

Low presence
Though the Christian community is a large group when compared to other minorities living in the city, their presence in Aram Bagh is very low. In recent years, four or five Christian families have shifted from other parts of the city to the neighbourhood. These families live opposite the Jamia Masjid.

Due to their low population, they do not have a church in the locality. However, their places of worship are not far away, as most of the oldest and largest churches built by the British missionary are located in Saddar Town.

Immigrants
Regarding Muslims, 71-year-old Muhammad Saeed, a senior member of the Jamia Masjid’s committee, says: “After Partition, the immigrants had set up their camps in Aram Bagh and the surrounding areas. Our family was also among them. Since then we have been living here.” He said that most of the properties left behind by Hindu and Sikh families were allotted to the immigrants by the government, adding that even the Jamia Masjid was not built by Muslims because the area had belonged to Hindus and Sikhs.

“We and then our children grew up with the children of Hindu and Sikh families in the same streets of Aram Bagh. We all know each other since childhood. We still sit together and talk about our lives. “They are not aliens. They are from among us. Or it is better to say that we are immigrants and they are the sons of the soil who settled the area, which is now Aram Bagh, a garden for relaxation.”