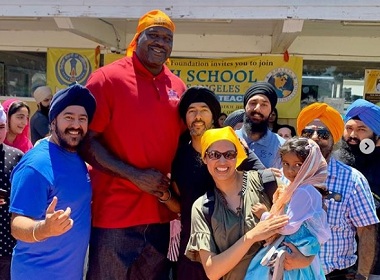 Shaquille O’Neal, a former Lakers and Heat star and four-time NBA champion, met with the Sikh community at the Khalsa Care Foundation, as part of a national campaign for Papa John’s.

At the Khalsa Care Foundation in Pacoima, California, a Sikh gurudwara where hundreds of devotees come each day, there was a surprise visitor this past weekend. One of the greatest basketball players of all times and now a television analyst, Shaquille O’ Neal, spent a day at the Sikh temple with the community, knowing more about the Sikh faith.

Shaq, a four-time NBA Champion, was part of a national commercial campaign launched by pizza giant Papa John’s, in which goes to different community centers. Sikh American actor and model Amandeep Singh, who hosted the former Lakers and Heat legend at the gurdwara, described the experience as greatly satisfying. “Shaq was so eager to learn about the Sikh community and met the community members with so much love,” he said, adding. “We all ate pizza, spent time with Shaq. He signed basketball bats fort so many young Sikh boys who idolize him.”

Singh said the genesis of the event was when the casting and production team got in touch with him. “We met with Shaq at the gurdwara and gave him an introduction to the Sikh community,” he said. “He met everyone with a very warm heart. He met with many Sikh children and took pictures with us all. The Khalsa Care Foundation in Pacoima, CA was only too happy and eager to host this event as it familiarizes the masses about the beliefs of the Sikh faith.”

That Shaq was totally involved in the event was apparent looking at the pictures. Amandeep Singh also showed Shaq how to tie the Sikh rumal, or the headscarf, and the legendary player happily partook in each and every custom showcased to him. Earlier this year, Shaq joined Papa John’s as a director and spokesman. The Louisville, Kentucky, -based chain struck the high-profile deal with Shaq in which the NBA legend is also an investor in some stores and holds a share in stocks.

Last year, Papa John’s courted controversy when its former CEO and spokesman John Schnatter used a racial slur commenting on the issue of NFL players kneeling during the national anthem. By getting Shaq on board and creating community events such as these, looks like the pizza chain is on giving the message of inclusivity to Americans.