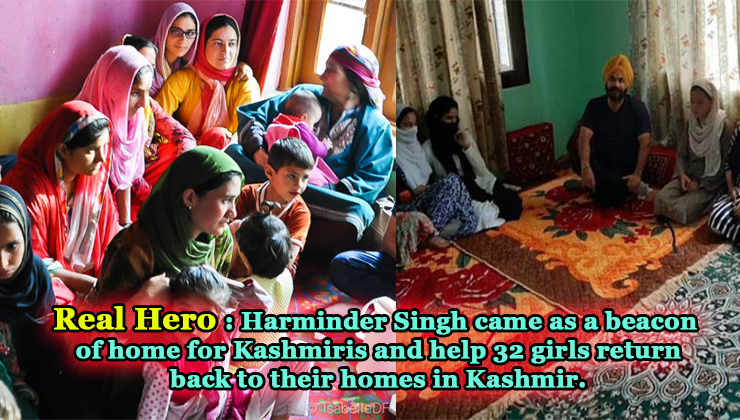 Harminder Singh came as a beacon of home for Kashmiris and help 32 girls return back to their homes in Kashmir.

The scrapping of Article 370 that previously gave the state of Jammu & Kashmir an autonomous identity came with an indefinite and complete ban of any kind of communication with and amongst the locals. Internet, phone, and television lines were disrupted leaving no way for Kashmiris living outside the state to get in touch with their families or go back home.

However, one software engineer from Delhi named Harminder Singh Ahluwalia came as a beacon of home for such stranded Kashmiris and went the extra mile to help a total of 32 girls return back to their homes in Kashmir. According to sources, Harminder went live on Facebook on August 5th to announce that all Kashmiris outside the state who were feeling unsafe could either contact him or take shelter in the nearest gurdwaras.

After his live session went viral on the internet, 32 girls got in touch with him seeking help. “I got a call from a woman named Rukaya, She told me that there were 32 Kashmiri girls, all from underprivileged families, just waiting to get back home, because of the recent government moves in Kashmir,” Harminder revealed.

All the girls were aged between 17-22 and were in Pune for a nursing training and placement programme as part of the ‘Deen Dayal Upadhyaya Grameen Kaushalya Yojana’. They had got in touch with the state government and were assured assistance from the Army after they reached Srinagar. However, they lacked funds to go to Srinagar in the first place. On hearing this, Harminder arranged for funds and sought donations online through another Facebook live session.

“A Sikh businessman was quick to contact me and sponsored the air tickets for the girls and four volunteers,” he said. It was because of his efforts that the girls were reunited with their families. A true hero of the nation indeed!