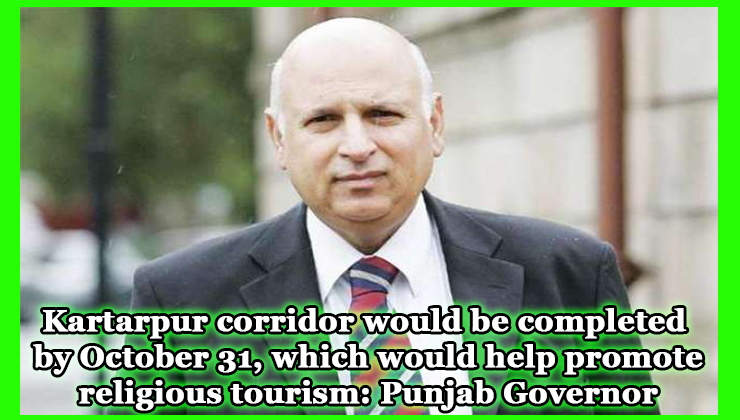 Kartarpur corridor would be completed by October 31, which would help promote religious tourism: Punjab Governor

Punjab Governor Chaudhry Muhammad Sarwar said on Wednesday that Kartarpur corridor would be completed by October 31, which would help promote religious tourism.

Chairing a meeting here at Circuit House, he said the incumbent government was focusing on renovation of all religious sites to promote religious tourism. Religious tourism have immense potential to fetch billions of dollars, he said and added that a special committee for protection and restoration of cultural, historic and renovation of religious buildings, had been formed under his supervision.

The Governor said that 400 million dollars was also available for the provision of safe drinking water in the country, adding the whole Punjab would have clean drinking water facility within next four years. All the filtration plants would be kept functional under Aab-e-Pak Authority, he added.

Ch Sarwar said the Authority would also ensure supply of safe drinking water in rural areas also. He said the Authority would enjoy powers including imposing fine on companies and providing unsafe water to citizens. He said that they had installed 200 water filtration plants with the cooperation of philanthropists and about 1.5 million people were availing the facility of these filtration plants.

He informed that about 20,000 citizens had undergone screening and among them, 20 percent were found positive with Hepatitis in the province. About 50 percent deaths occur due to water borne diseases in the country, he added. Provincial minister for Energy Dr Akhtar Malik, parliamentary secretary for information Nadeem Qureshi, Special Assistant to CM Punjab Javed Akhtar Ansari, MPAs Wasif Raan, Zaheeruddin Khan, Commissioner Multan Iftikhar Sahu, Deputy Commissioner Aamir Khattak and many others were also present.